Update 2018-01-28: LAKE videos of Valdosta Mayor and Council talking about $406 million and 25% discretionary funds which can be used for things like public transportation.

Preparing for a vote on the May 22, 2018, primary election ballot, SGRC is holding two public meetings next week to review what the regional roundtable has come up with for a project list for a regional one-percent sales tax. Most of the projects, ranging from $18 thousand to $26 million dollars, are for roads and bridges, but there are also sidewalks and one airport tower light. There is nothing in the project list for public transportation, but 25% of the funds are not on the project list, and counties or cities could choose to use some of those funds for example for paying for the urban area parts of trips by the Lowndes County MIDS on-call bus service. 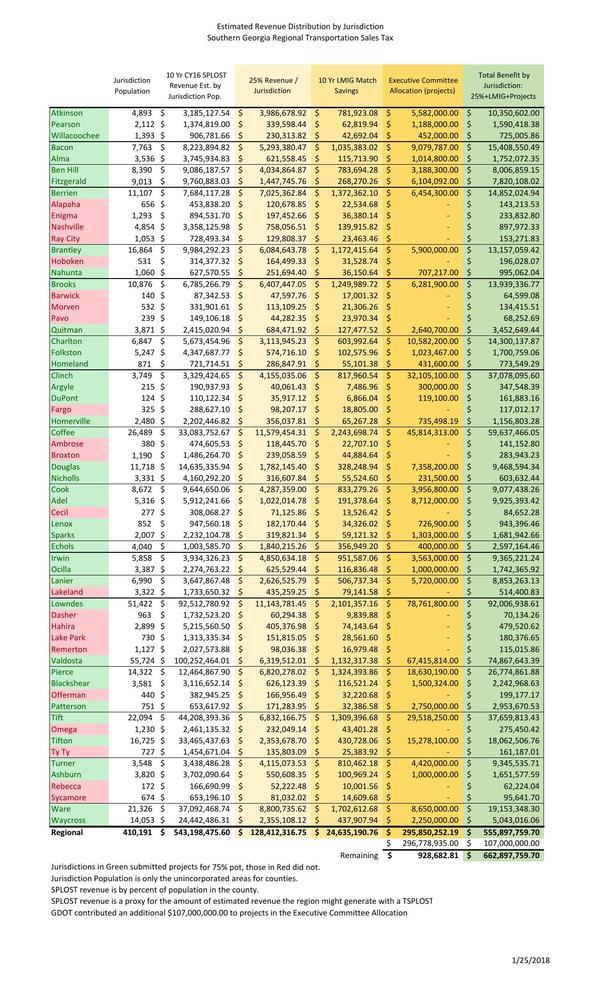 Over the past six months, The Executive Committee of the Roundtable has met several times to select the projects presented in this draft list. The Executive Committee reviewed each project and how it best met the needs of the region, and worked to make sure the proceeds of the sales tax are divided equitably throughout the region. The Executive Committee selected 150 projects, totaling more than 296 million dollars. These projects are located throughout the region and each county is represented by at least one project on the list. This sales tax is estimated to generate more than 513 million dollars over the next 10 years for transportation purposes. Twenty-five percent of the proceeds or 128 million dollars will be divided by formula to each city and county in the region. If the sales tax is passed by the voters, local jurisdictions will also see a reduction in the match they pay on annual LMIG (Local Maintenance Improvement Grant) funds they received from the Georgia Department of Transportation from 30-percent to 10-percent, an additional savings of more than 24 million dollars over 10 years to each city and county in the region.

The public meetings are as listed above, and the project list is online now.

After the public meetings the Regional Transportation Roundtable will reconvene on February 13, 2018 to review the public comments and adopt a Final Constrained List that will be presented to voters on the May 22, 2018, general primary ballot.

For more information about the Regional Transportation Sales tax, please contact Corey Hull at the Southern Georgia Regional Commission at 229-333-5277 or via email at chull@sgrc.us.

The agenda for the previous roundtable Executive Committee meeting of January 17, 2018 says the Febuary 13, 2018, meeting will be in Pearson. Its Chair is John Gayle, Mayor of Valdosta.