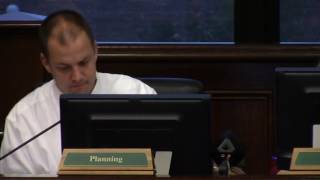 Bill Branham’s Copeland Road development got six minutes of discussion, the longest in yesterday morning’s Work Session, with others of the seven rezonings also getting discussion, plus, surprisingly, the proposed VOCA grant, because the outgoing DA spoke. They vote tonight at 5:30 PM. I would like to compliment the Commissioners on asking questions and having discussion in the Work Session. Even ever-silent Joyce Evans spoke up about the MIDS on-call bus system grant re-application.

They’re going to reappoint Dr. Randy Smith to the Board of Health. Chairman Bill Slaughter said: “Inside your packets you have a letter from Dr. Grove supporting Dr. Smith.”

But we the citizens, taxpayers, and recipients of health care didn’t get to see that letter. The Chairman went on to recommend Dr. Smith, and I thank him for making that recommendation in public where we could all see and hear it. Dr. Smith is probably a fine board member: that’s not the point. The point is if the public could see these things they might have useful input, not to mention it’s the public’s business the Commission is doing. Similarly Commissioners had a quarterly financial report “before you”, but the public couldn’t see it. If tiny Effingham County can publish its County Commission packets, mighty Lowndes County could to it, too.

Below are links to each of the LAKE videos, with a few notes, followed by a video playlist. Gretchen put further notes directly in the YouTube video comments. See also the agenda, and for the rezonings the LAKE videos of the preceding Planning Commission meeting. If I’m not mistaken, GLPC recommended for all of the rezonings, although the Branham one was a split 6:2 vote.