Valdosta has already passed a resolution against HB 170, published PR about that, and written a letter to the sponsor of the bill, spelling out that this is not any new tax money the legislature is allocating: it’s taking tax money away from local governments, so much that counties, cities, and school boards would be forced to raise local taxes: again, after just raising property taxes a few months ago.

A House subcommittee on Monday voted to advance a major transportation funding bill to full committee, an important first step for a complicated proposal.

The Transportation subcommittee heard more than an hour of testmony, including concerns from Georgia’s cities and school districts before agreeing to send House Bill 170 forward. The full Transportation Committee could hear the bill as early as Thursday.

The article admits that the bill’s supporters claim that it would raise “new” money actually means local governments would have to add taxes:

Local governments could add an additional 6 cents per gallon to replace lost revenue.

Thursday morning the Lowndes County Commission at its annual retreat heard Harrison Tillman tell them that local governments would lose about $12.6 million overall, including $335,000 tax loss to the county government.

HB 170 came up again Friday in the Goals discussion of the retreat, when Chairman Bill Slaughter said he didn’t want to take a position until the final text of HB 170 was known. I’m no expert at state legislative processes, but isn’t the best time to lobby before the final text is known so you can affect what the text is?

There have been some changes to the bill, but it’s still a tax taking by the state that would force local governments to do the actual tax hike. Jon Richards, Peach Pundit, 9 February 2015, Subcommitee Moves Substitute Bill to Full Transportation Committee,

The Highway Regulations subcommittee of the House Transportation Committee met this afternoon to consider another substitute to House Bill 170, the Transportation Funding Act of 2015. Changes to the bill from its previous version include terminating the $5,000 tax credit for electric vehicles, changing the way counties could charge excise taxes to replace LOST revenue they will lose, and allowing county excise taxes to be used to repay transportation bond debt. No changes were proposed to the 29.2 cent proposed state excise tax rate.

Transportation Committee chairman Jay Roberts outlined the proposed changes to a packed hearing room. Instead of allowing cities and counties each to institute a three cent excise tax by a vote of their governing body, plus another three cents each if approved by citizen referendum, the new proposal allows county commissioners the ability to vote in a six cent countywide gasoline excise tax, which would be split with the cities according to the existing Local Maintenance and Improvement Grant (LMIG) formula, which is based on centerline miles of local roadway within the county or city.

Speaking to reporters after the hearing, Chairman Roberts stated that he thought this should ease concerns by counties and cities, noting that a six cent excise tax plus additional LMIG funding from the state, plus the ability to move transportation from a county’s existing budget to the excise tax should make up for the loss of revenue from a gasoline sales tax. And, Roberts stated his guiding principle that he was not going to allow sales tax on fuel not to be used for transportation purposes. On whether the proposed statewide excise tax rate of 29.2 cents per gallon would hold Roberts said that he was waiting on the fiscal note, which will describe the amount of money the bill is expected to raise.

So, if the sponsor of this stealth tax hike boondoggle says gas taxes will only be used for transportation purposes, can we trust that as much as we could assertions that wildlife license plate fees would go to wildlife programs? That one got partly fixed last year, but only after the damage had been done: like many others, I no longer buy those license plates, and the originally intended fund recipients have effectively been defunded. Do we want that to happen to our public schools?

And how about a guiding principle of not sabotaging one of the few things Georgia is good at, namely being number one in electric car sales?

Local government agencies have joined some Senate Democrats and some conservative, anti-tax organizations in opposition to the package. Gov. Nathan Deal, Lt. Gov. Casey Cagle and House Speaker David Ralston all have urged legislators to address Georgia’s transportation needs this session, arguing that it is essential to the state’s economic future. 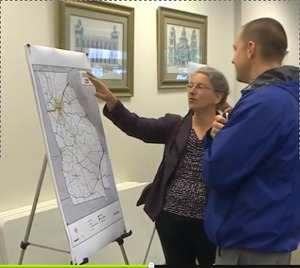 More like essential to more profits for trucking companies. If the Governor were concerned about the state’s economic future, he would have produced a real passenger rail plan instead of GDOT ignoring citizen input about that. And he did nothing to change his predecessor’s refusal to accept federal high speed rail funds. I haven’t heard anything about HB 170 funds going to any passenger rail projects outside Atlanta, either.

Somebody had to do something, the speaker shrugged, or the Capitol would have lost control of an important conversation.

Our exchange quickly shifted to what may be, in philosophical terms, the most important aspect of H.B. 170: An endorsement of mass transit — long the racially charged punching bag of Republicans in Georgia.

If Galloway or House Republicans or anybody else is concerned about mass transit in Georgia, how about funding passenger rail from Valdosta to Atlanta? Taking Valdosta and Lowndes County taxes to Atlanta for MARTA is not an answer.

I think Galloway missed the most important admission by the Speaker: it’s about state control of local funds. Galloway remarks, in a typical Atlanta attitude:

That the legislation would require local officials to raise new taxes to help replace $500 million or so in lost revenue is, in one sense, beside the point. For now.

Tired of being “beside the point” to whatever Atlanta wants? Speak up this evening at the County Commission against HB 170!

Control by Atlanta, and revenge for counties that voted against T-SPLOST. It may not be coincidental that HB 170 bill sponsor Jay Robert’s Mitchell County passed T-SPLOST, even if only by less than 1%, while Lowndes County and Valdosta voted heavily against T-SPLOST.

While Valdosta may have more reason to be concerned, because its citizens would be taxed doubly if both Valdosta and Lowndes County raised taxes to cover the HB 170 shortfall, it seems like the shortfall to the county predicted by the county’s own tax expert would be enough for the county government to actively oppose HB 170.

Will the county government represent all the citizens of the county?