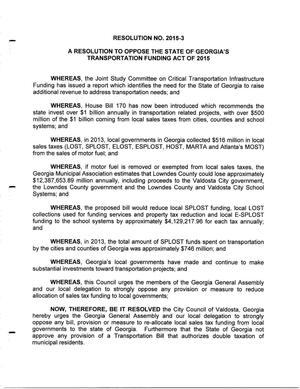 WHEREAS, the Joint Study Committee on Critical Transportation Infrastructure Funding has issued a report which identifies the need for the State of Georgia to raise additional revenue to address transportation needs; and

WHEREAS, House Bill 170 has now been introduced which recommends the state invest over $1 billion annually in transportation related projects, with over $500 million of the $1 billion coming from local sales taxes from cities, counties and school systems; and

WHEREAS, in 2013, local governments in Georgia collected $516 million in local sales taxes (LOST, SPLOST, ELOST, ESPLOST, HOST. MARTA and Atlanta’s MOST) from the sales of motor fuel; and

WHEREAS, the proposed bill would reduce local SPLOST funding, local LOST collections used for funding services and property tax reduction and local E-SPLOST funding to the school systems by approximately $4,129,217.96 for each tax annually; and

WHEREAS, in 2013, the total amount of SPLOST funds spent on transportation by the cities and counties of Georgia was approximately $746 million; and

WHEREAS, Georgia’s local governments have made and continue to make substantial investments toward transportation projects; and

WHEREAS, this Council urges the members of the Georgia General Assembly and our local delegation to strongly oppose any provision or measure to reduce allocation of sales tax funding to local governments; 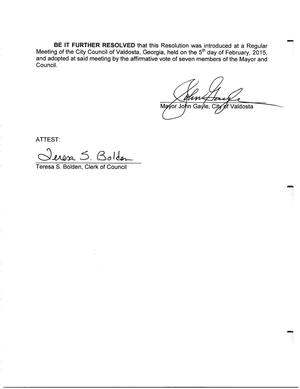 NOW, THEREFORE, BE IT RESOLVED the City Council of Valdosta, Georgia hereby urges the Georgia General Assembly and our local delegation to strongly oppose any bill, provision or measure to re-allocate local sales tax funding from local governments to the state of Georgia, Furthermore that the State of Georgia not approve any provision of a Transportation Bill that authorizes double taxation of municipal residents.

BE IT FURTHER RESOLVED that this Resolution was introduced at a Regular Meeting of the City Council of Valdosta, Georgia. held on the 5th day of February, 2015, and adopted at said meeting by the affinnative vote of seven members of the Mayor and Council.