At the end of May, the AP1000 consortium of Shaw and Westinghouse signed an engineering, procurement and construction contract (EPC) for two 1117 MWe AP1000 reactors at the existing VC Summer nuclear power plant site in South Carolina, USA. South Carolina Electric and Gas (SCE&G), the main subsidiary of Scana Corp, executed the EPC contract on behalf of itself and its partner Santee Cooper, a South Carolina state-owned utility. The first unit could enter commercial operation by 2016, and the second in 2019.

The new contract for Doosan, worth some $195 million, closely follows an earlier contract from Westinghouse to supply major equipment, such as steam generators and reactor vessels, for two AP1000s units to be constructed at Georgia Power’s Vogtle nuclear power station near Augusta, Georgia. Subject to approvals, the two units are slated to enter service alongside Vogtle’s two existing reactors in 2016 and 2017.

South Korean Prime Minister Chung Hong-Won vowed Friday to mete out severe penalties to anyone involved in a forged documentation scandal that has shut down a host of nuclear reactors.

“It is a grave crime that angers both heaven and human beings,” Chung told officials at a government policy coordination meeting.

The move, part of a widening investigation into a scandal involving parts provided with fake safety certificates, means 10 of the South’s 23 nuclear reactors are currently offline for various reasons.

“Those found to be involved in wrongdoing or corruption must be sternly punished by the law, regardless of their rank and status,” Chung said.

How far do the effects of this corruption extend? Look at Doosan’s map of worldwide experiences, including in the U.S. Summer 2,3, Duke Energy’s Levy County 1,2 (not built yet), Entergy’s Waterford 3 (remember the dark Super Bowl?, TVA’s Sequoyah 1,2 and Watts Bar 1 (all within 500 miles of here) plus Entergy’s Indian Point 2,3 near New York City and Arizona Public Service’s Palo Verde 1,2,3 near Phoenix, Arizona. With Vogtle 2 and 3, that’s fifteen reactors in the U.S. supplied by document-forging Doosan. How bad is this Doosan documentation fraud, and what’s in those boxes investigators for prosecutors are shown here seizing from the offices of JS Cable, which supplied faulty cables to nuclear power plants (picture by Yonhap News)? Lee Seung-jun wrote for the hankyoreh 3 June 2013, South Korea’s nuclear power mafia controls the whole business: Recent safety violations being traced to an industry culture that lacks independent oversight and doesn’t enforce regulations, 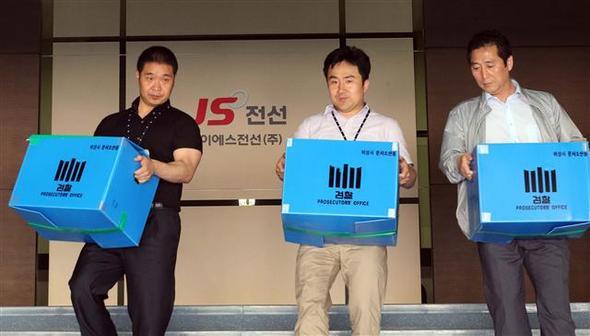 Nuclear power policy and management in South Korea: a game where the players are their own referees?

Critics are saying the accidents and irregularities discovered over the past two years at nuclear plants are just the tip of the iceberg for a system that has gone on for more than 50 years, where a so-called “nuclear power mafia” holds public safety and power supply in its hands.

The biggest issue is a scandal that surfaced on May 28, in which plants were found to have been supplied with defective control cables after testing results were falsified, may not be the last. Even the Nuclear Safety and Security Commission (NSCC) acknowledged that similar scandals “could emerge” in the future. Korea Hydro and Nuclear Power (KHNP) bidding information that was examined on June 2 showed that JS Cable, which supplied the faulty cables, also provided a number of Level Q “safe cables” to power plants such as Hanbit (in South Jeolla’s Yeonggwang) and Busan’s Kori between 2011 and 2013. Saehan TEP, the company implicated in the falsified documents, has routinely handled quality inspections, earning a 2012 award from the Ministry of Education, Science and Technology for being an “outstanding business.” Data from a parliamentary audit last year showed that four businesses barred from bidding because of involvement in improprieties between 2008 and 2012 had earned presidential commendations or been selected as “outstanding nuclear power businesses for shared growth and cooperation.” KHNP has roughly one thousand companies making three million nuclear power plant parts, with seven testing institutes doing the safety inspections. But now it is uncertain just how safe they actually are.

According to critics, the root of the problem is a pervasive “back scratching” culture that has persisted for over half a century since an atomic energy division first appeared in 1956 in the technology education bureau of what was then the Ministry of Education.

“There has never been any accountability or punishment whenever a problem has occurred,” said Jang Jeong-wook, an economics professor at Japan’s Matsuyama University and frequent critic of the incestuous relationships among South Korean nuclear power businesses.

Is that article describing Korea or the U.S., where the NRC failed to find a reactor vessel flaw for a year at Harris in North Carolina, and has never closed an operating nuclear plant? San Onofre 2 and 3 are closing because of SoCal Edison’s decision after widespread protests, not because of the NRC, which never did do its job. Southern Company just won a bunch of awards, too, as SO CEO Thomas A. Fanning bragged in May’s stockholder meeting.

On Thursday, the prosecution said Park Yong-sung, former chairman of Doosan Group, and three of his brothers embezzled 32.6 billion won ($31.2 million) in company funds over the past 10 years.

The brothers were also accused of involvement in accounting fraud that inflated company sales by about 283 billion won ($271 million), the Seoul District Prosecutors’ Office said in a statement.

Prosecutors also indicted 14 former and current executives of Doosan Group on embezzlement and other charges, the result of their two-month investigation into the conglomerate’s alleged slush funds.

They are suspected of having embezzled 28.6 billion won ($27.4 million) from Doosan Industrial Development Co., a construction subsidiary of the conglomerate, and a secret subsidiary called Donghyun Engineering, from 1995 until recently, according to the prosecution.

The brothers are also charged with misappropriating 3.98 billion won ($3.81 million) from his business group’s furniture-making affiliate Nefs Co. from 1998 through the end of last year.

But prosecutors said they would not detain Park Yong-sung and his brothers, considering his global high-profile status as an international sports leader.

Being on the International Olympic Committee and president of the International Judo Federation was apparently more important than corporate ethics. Did that too-sporty-to-fail approach work, what with Doosan again mired in a corruption scandal? Here’s Park Yong-Song celebrating Korea winning the 2018 Olympics, 5 July 2011 (picture by Jasper Juinen/Getty Images Europe). But what have we won from Doosan in Georgia and South Carolina?

This time will anyone “be sternly punished by the law, regardless of their rank and status” in Korea, or in Georgia or South Carolina?

How about we start with capping cost overruns at Plant Vogtle so Southern Company has to eat them like it did for Kemper Coal, the plant a Mississippi PSC member

called “the greatest transfer of wealth from customers to a monopoly” (guess he didn’t consider Plant Vogtle). How about we cancel the $8.33 billion federal loan guarantee while we’re at it? Let’s continue with modifying the antique 1973 Territorial Electric Service Act so we can finance and sell solar power on an open market in Georgia. It’s time to stop the nuclear boondoggle so we can get on with real renewable solar and wind power.