Did you know we already have coal ash in our Lowndes County landfill?

And where will the trash come from for that landfill gas project, subject of the meeting 8:30 AM tomorrow morning at the Colquitt EMC office in Valdosta? Atlanta, or even farther north (or south)? And what will be in it: coal ash like Taylor County’s landfill, with arsenic and lead?

As we’ve seen, GreenPower EMC’s previous two landfill gas projects seem to be in Taylor County, Georgia. What none of GreenPower, ESG, ADS, or Colquitt EMC seem to have mentioned is that much of the trash in the landfill in Mauk, Taylor County, between Machon and Columbus, appears to come from farther north.

The 120-foot-high, 90-acre mound of compacted trash could become the destination for 5,000 tons of commercial and residential garbage generated every day by the city of Atlanta.

At about 1,500 acres (more than 2 square miles), the Taylor County dump is the largest landfill in the state and already accepts trash shipped by railcar from as far away as Connecticut, Rhode Island and New York City.

The company is pushing for permission to build a $/00 million waste transfer station on 20 acres on the west end of Atlanta from which it would ship Atlanta trash by train to rural Taylor County, about 90 miles to the south.

I don’t know whether they got approval for Atlanta trash, but in addition to CN, RI, and NYC, they’re already getting trash from Miami, as Allied district manager Mike Shattles bragged:

At the rail station about an eighth of a mile away, Shattles points at a long line of cars loaded with refuse containers and describes how stealthily the garbage has been shipped such great distances. 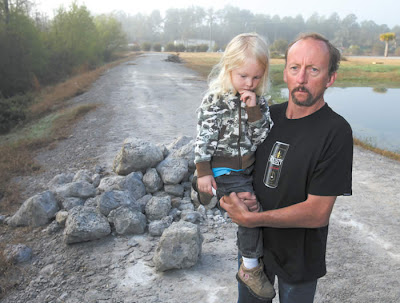 “That covered container came from Miami and nobody even knew it was garbage,” he says. “There’s no smell and you can’t see it until they dump it on the hill.”

And that’s not all. Pam Sohn wrote for the Chattanooga Times Free Press 10 May 2009, TVA sending ash to 2 sites,

The Tennessee Valley Authority won’t identify where in Georgia and Alabama the coal ash sludge spilled in Kingston, Tenn., is being taken during the utility’s two-week disposal test.

“That information is simply not being given out,” TVA spokesman Gil Frances said Friday, adding that the sites in Georgia and Alabama are nonhazardous landfills.

Mr. Francis said the locations of the landfills aren’t being disclosed because the test will help the utility choose the contractors for disposal work. However, TVA documents and officials in Georgia and Alabama identified the specific municipal waste landfills set to receive the ash.

Derrick Williams, with the Georgia Environmental Protection Division’s solid waste program, said a landfill in Taylor County near Mauk, Ga., in the middle western portion of the state will receive some ash loads.

What is that coal ash?

Officials with TVA have said the ash sludge is nonhazardous, but regulatory and independent tests have found high levels of toxic substances such as arsenic, selenium and lead in the material and water. Mr. Francis said the utility is complying with state and federal regulations in handling the cleanup and test disposal.

Arsenic and lead? We already have 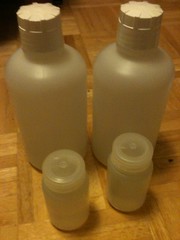 a Georgia Health Department warning to test our well water for those toxic metals (here’s how).

Some of that arsenic, at least in the Alapaha River, is probably coming from Southern Company’s Coal Plant Scherer near Macon. Do we need another, much closer, source of arsenic, lead, and other toxic metals?

Oh, wait: we already do! S. Heather Duncan wrote for The Telegraph 15 May 2009, Coal ash waste headed to midstate,

But the Taylor County facility wouldn’t be the first in Georgia to accept coal ash from out of state, [Jeff] Cown [Cown, solid waste program manager for the Georgia Environmental Protection Division] said. He knows of at least four others in south Georgia, including the Veolia landfill in Lowndes County, that take coal ash from Florida power plants.

Does this part sound familiar to you?

Jack McGlaun of Butler said artesian springs around the landfill are part of a large aquifer. “This is not just a Taylor County thing,” he said. “This aquifer goes to Montezuma and all these other towns below us into south Georgia.”

McGlaun said the community just fought off a medical waste incinerator project about 18 months ago.

“Taylor County seems to get more than their fair share of proposals to dump other people’s waste,” said Justine Thompson, an attorney for the Atlanta firm Greenlaw.

“They irony is the very same week a report is released about the dangers of coal ash to those who live near it, a test project was launched to put it in our state,” she said. “The most disturbing aspect is the dismal lack of public notice.”

Do you remember any public notice about coal ash being imported from Florida to Lowndes County? I don’t.

Near Plant Scherer, Georgia Power is buying and leveling homes near a coal ash pond because people living in them are at risk of cancer, and many of them say they have already gotten cancer. As noted in a Southern Company http://www.l-a-k-e.org/blog/2012/05/coal-ash-and-political-spending-transparency-shareholder-resolutions-defeated-so-2012-05-23.html#item4,

“Whereas: Coal combustion waste (CCW or coal ash) is a by-product of burning coal that contains potentially high concentrations of arsenic, mercury, heavy metals and other toxins filtered out of smokestacks by pollution control equipment. CCW is often stored in landfills, impoundment ponds or abandoned mines. Over 130 million tons of CCW are generated each year in the U.S.

“The toxins in CCW have been linked to cancer, organ failure, and other serious health problems. In October 2009, the U.S. Environmental Protection Agency (EPA) published a report finding that ‘Pollutants in coal combustion wastewater are of particular concern because they can occur in large quantities (i.e., total pounds) and at high concentrations…in discharges and leachate to groundwater and surface waters.’

“The EPA has found evidence at over 60 sites in the U.S. that CCW has polluted ground and surface waters, including at least one site belonging to Southern Company. In some of these cases, companies have paid substantial fines and have suffered reputational consequences as a result of the contamination.

“Reports by the New York Times and others have drawn attention to CCW’s impact on waterways, as a result of leaking CCW storage sites or direct discharge into surrounding rivers and streams.

“The Tennessee Valley Authority’s (TVA) 1.1 billion gallon CCW spill in December 2008 that covered over 300 acres in eastern Tennessee with coal ash sludge highlights the serious environmental risks associated with CCW. TVA estimates a total cleanup cost of $1.2 billion. This figure does not include the legal claims that have arisen in the spill’s aftermath.

Who agreed to import coal ash to Lowndes County? Don’t we have enough cancer sources in Lowndes County already? Why do we need more? And what else will be imported into Veolia’s (excuse me, ADS’s) Pecan Row Landfill Gas Facility?