The day after the VDT ran Lowndes County’s admission that the sewer line break was theirs, not Valdosta’s, did the VDT start a series of financial investigation like they did about Valdosta’s water issues? Nope, they ran a piece about how much weather costs the county, with no recognition of watershed-wide issues, nor of any need for the county to participate in proactively dealing with them, to reduce costs, for better quality of life, to attract the kinds of businesses we claim we want. Nope, none of that. 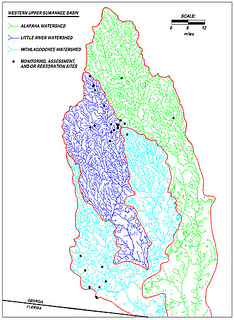 In the Deep South, near a river plain where floodwaters rise and ebb from season to season and wetlands that distinguish the region from anywhere else in the nation, flooding makes a significant portion of the concern for Lowndes County emergency management.

OK, that’s close to getting at some of the basic issues. We’re all in the same watershed, and we need to act like it instead of every developer and every local government clearcutting and paving as if water didn’t run downhill. Does the story talk about that? After all, the county chairman attended the 11 April 2013 watershed-wide flooding meeting that led to the city of Valdosta’s likely participation in flodoplain planning. Nope; according to the VDT, everybody around here seems to be hapless victims of weather:

END_OF_DOCUMENT_TOKEN_TO_BE_REPLACED

On the other hand, the Chairman asserted END_OF_DOCUMENT_TOKEN_TO_BE_REPLACED

Slides for this presentation are now available on the LAKE web pages.


Thanks to Ashley Turner and Paige Dukes for sending them along.