Every electric utility can read that chart from the U.S. Energy Information Agency, which shows wind (the middle orange line) and solar (the green line coming up from the bottom) adding up to almost all of “other renewables” (the top blue line), with nothing else growing like that. All the pipelines rammed through regulatorially captured agencies don’t come close END_OF_DOCUMENT_TOKEN_TO_BE_REPLACED 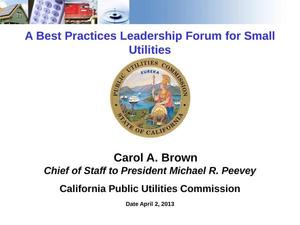 A utility didn’t stop at blowing up a Calfornia neighborhood, it also demanded the Public Utilities Commission (CPUC) get a favorable judge for that 2010 San Bruno natural gas pipe explosion. The CPUC president’s chief of staff just last year wrote slides praising his Legacy as Best Practices. Does that legacy include suborning justice? He’s still there, although she was fired, and three PG&E executives “ended their employment”. How many other PG&E and other utility executives and CPUC and other state regulators follow those same Best Practices?

Four senior officials with Pacific Gas & Electric Co. and the state commission regulating it were removed or resigned over emails released Monday showing the utility and state regulators appeared to negotiate which judge would be assigned to hear one of the utility’s rate cases.

The emails show the commission ultimately assigned to the case a judge for whom PG&E had expressed a preference, rather than another judge who PG&E said “has a history of being very hard on us.”

No worries about this reactor coolant system defect; Westinghouse says so, and didn’t even list Vogtle or Diablo Canyon, where Southern Company and PG&E said they were going to install these shields. Nevermind a reactor operator warned us back in January. Westinghouse did list “Beaver Valley Unit 2, Callaway, D.C. Cook Unit 1, Farley Units 1 and 2, and Wolf Creek”.

“The defect being reported concerns an identified inconsistency between the intended design functionality of the SHIELD passive thermal shutdown seal (SDS) and that observed during post-service testing.

“The purpose of the SDS is to reduce current reactor coolant system inventory losses to very small leakage rates for a plant that results in the loss of all reactor coolant pump (RCP) seal cooling. The SDS is a END_OF_DOCUMENT_TOKEN_TO_BE_REPLACED

The local newspaper didn’t look past PG&E’s news about unit 2 coming back up (lightning strike) to notice that unit 1 had been down (pipe leak) a few weeks before.