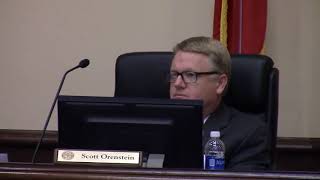 They added and agenda item for 7.p. Solicitor-General’s VOCA Grant Renewal; yes, really, the agenda was so long that’s sub-item letter P and the meeting was 51 and a half minutes long.

Longest at seven minutes was 6a. REZ-2017-11 Arrow Engineering, in which the County Commissioners ignored the Planning Commission’s recommendation to deny, and the County Planner’s observation the previous morning that the applicants would accept one acre. Instead they approved 2.5 acres with no conditions as Office Institutional (OI) in an area with no other instances of that.

At six minutes, 7.n. Georgia Power- VisionFirst was about putting $25,000 to hire an unnamed consultant for a joint project for unspecified results.

Update 2017-11-22: According to Chairman Bill Slaughter, the consultant is VisionFirst Advisors out of Tallahassee.

Did they mean the sinkhole-infested Mission Creek instead of 7.k. Grant of Easement for Utility Right of Way Moody-Mission Point?

Five minutes included questions from the Chairman and resulted in a split vote and a stern warning on 7.i. Beer, Wine & Liquor License – Liquor Barn, 3990 N. Valdosta Rd.

One of the two road abandonments, 7.a. Abandonment of Lane Road and a Portion of Sheavette Road, got a very rare split vote, with Commissioner Clay Griner voting alone against.

Below are links to each LAKE video, followed by a LAKE video playlist. See also the LAKE videos of the previous morning’s Work Session, and the agenda in the previous post, especially about 7.l. North Lowndes and Spring Creek Interconnection, which they approved Tuesday as yet another no-bid single-source contract.