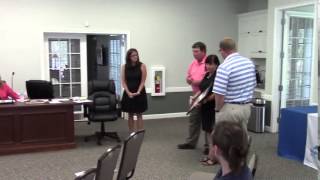 They meet again tonight; here are videos from last month, when Electrical Test Labs of Georgia was recognized, and claimed dibs on some land.

The Development Authority re-elected its same officers, after extending the term of the Chairman to two years.

SGRC’s Corey Hull presented very briefly about the 2040 Transporation Plan, and asked for questions. The Development Authority had none.

Lots of dials showing goals and how far they are to reaching them in Meghan Duke’s Community Relations and Marketing Update. She concluded by showing off a Made in Valdosta t-shirt. Great idea, but my crops are made in Lowndes County, not Valdosta.

When Roy Copeland exited the room early on, he left Jerry Jennett a note, which Jennett asked about: what is this V S E B? Stan Crance and Tom Call reminded Jennett it is the Valdosta Small Emerging Business (VSEB), and that VLCIA had frequently tried to get local small and emerging businesses involved in their contracts. The specific grass-mowing contract under discussion was probably too small to split up for that.

The attorney mentioned estoppel, and several people wanted to know what was, and wished they could get it once they found out.

In Citizens Wishing to Be Heard, Jerome Tucker said he’d arranged with Pine Grove Middle School to act as an agrobusiness resource center.

I mentioned Pine Grove Middle is also the venue for the annual South Georgia Growing Local Conference. I asked for a letter of support to WWALS for the Withlacoochee and Little River Water Trail. I noted public transportation would attract development towards it and out of the agricultural area where I live. Plus Live Oak has started a bus system. Maybe VLDA would like to chip in that $16,000 the Lowndes County Commission declined to invest in a transportation study.

After noting I wished I didn’t have to talk about it, I gave them an update on the Sabal Trail fracked methane pipeline and recommended they do something about it, such as a resolution. They said nothing in the meeting. Afterwards Chairman Tom Call indicated they weren’t likely to do anything.

Here’s the agenda, and below are links to the videos plus some stills.