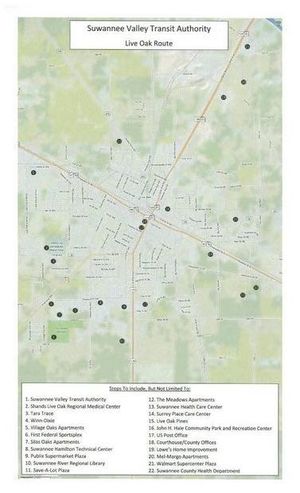 and loops back again roughly every two hours. Passengers can ride west as far as Shands Live Oak Regional Medical Center, south to the Live Oak Public Library, east to Suwannee Health Care Center and north to Walmart. See the map above for a list of bus stops; the list is not exhaustive as there are many other stops that can be made depending on rider needs.

This new mode of public transportation is part of SVTA’s efforts to expand its services beyond non-emergency medical transport, which it has come to be known for due to the high volume of Medicaid riders in the past.

“The bus route is one of those things where, until we put our foot in the water, we’re not going to know how cold or how hot it is,” SVTA Administrator Larry Sessions said. “It’s something that’s needed in the community. We have a lot of locals that we pick up and do things locally that we dispatch a whole vehicle for. A lot of these people may just get on and ride the bus instead, and that’ll free up some of our resources to do other things and to go out in the community a little bit farther. So this could take care of a lot of things right here in Live Oak.”

That sounds awful like the kind of adaptable bus route that Corey Hull explained to the Lowndes County Commission that VLMPO is proposing. Except Live Oak is doing it, while much larger Valdosta and Lowndes County haven’t even finished funding a study.

Even if you add the other Suwannee Valley Transit Authority (SVTA) counties of Columbia (67,543) and Hamilton (14,354), the total SVTA area population of 125,631 is hardly bigger than Lowndes County alone. Plus to match, we should add Brooks (15,516), Lanier (10,408), and Echols (4,057) Counties, Georgia for a total Valdosta Metropolitan Statistical Area (MSA) population of 142,897. So comparing all the counties shows Valdosta MSA has more people than the SVTA area.

Sure, the pre-existing SVTA is an advantage, but so is the Lowndes County MIDS bus system, which has been providing the same kind of on-call transit services as SVTA. Until now, when SVTA starts a more regular bus system Monday.

And sure, the kind of test route SVTA is doing sounds a lot like what Lowndes County Commissioner Joyce Evans reminds everyone the county tried a decade or so ago.

But maybe times have changed. And Live Oak is going to find out.