The county asked SGRC a bunch of questions about the $15,957 public transit and trucking studies at yesterday morning’s Work Session that they didn’t ask about the $16,915 they spent two weeks ago to upgrade a water main to subsize a developer. Commissioners seemed to think VLMPO hadn’t involved them in planning the study proposals, when in fact their own Chairman and County Manager and Engineer had been involved all along, plus five county-appointed citizens. 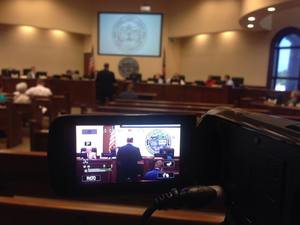 County Manager Joe Pritchard said Commissioner Joyce Evans and Chairman Bill Slaughter had asked him to get the Southern Georgia Regional Commission (SGRC) to explain its proposed transportation studies. He also introduced Lisa Crib, whom he said was the new SGRC Executive Director.

Of course we’re talking about the truck traffic study primarily, and the public transit study as well. Of course in our previous Commission [meeting], the Commission voted to not fund these two studies.

Actually, the Commission did not vote. Commissioner Demarcus Marshall made a motion to fund the studies, but couldn’t get a second, so there was no vote.

Commissioner Evans also wanted to know what were the changes from the previous studies.

Answer (paraphrased): VLMPO proposes two new studies, one on truck traffic and the other on urban transit.

The first is because of truck traffic issues in downtown Valdosta, for which a consulting firm would evaluate at least three different paths for bypassing traffic around downtown Valdosta, plus operational improvements seen from an outside perspective. The scope of work is still open to changes and no RFP has been sent out.

The previous 2007 study said a transit system would be viable in the urban area, which includes Moody to Valdosta, Hahira to Valdosta, and Brooks County through Troupville to Valdosta, then to the city limits on the south side of Valdosta. Transit funds are divided into rural (as the county’s 5311 MIDS bus service) and urban. The county has received a letter saying 5311 funding will be phased out within the urban area, although MIDS can keep operating in the rural area and through other funding means. That was for 10 vehicles on five routes.

However, there was stimulus (ARRA) funding available then that was not now. And that previous plan assumed heavy city-style busses rather than the light vehicles VSU uses. There are new technologies in the past five years such as Uber taxis; demand-response; public-private partnerships. So there are more options to consider. The draft scope of work includes that there must be a subsidy from a local entity; which one or several is not determined. But the idea is to minimize that subsidy for operations while delivering a good service for our community.

Nobody mentioned the 2007 mega-mall boondoggle that the county subsidized by widening James Road from 2 lanes to 5 that we’re still paying for eight years later. Every road and bridge is a subsidy. How about the county question each of those projects like it questioned this one?

Why did the MPO not give us the opportunity to vote on those or to look at those individually?

Hull said back in March VLMPO had considered them and in June had voted to go ahead with them. And never before have proposals to local governments been broken out into pieces.

Orenstein didn’t seem aware that Joyce Evans sits on the SGRC Council as the Lowndes County representative, nor that the Valdosta-Lowndes County Metropolitan Planning Organization has five Lowndes County appointments to a Citizens Advisory Committee (CAC), and a Technical Advisory Committee (TAC) consisting of county and city engineers. Its Policy Committee is its final decision-making body, and on it sit the Lowndes County Chairman and Manager and the Valdosta City Mayor and Manager, plus rotating seats for the smaller cities and the outlying counties. Slaughter asked Hull to explain all that to the County Commission, which he did plus many details about the actual votes. He didn’t mention he even makes facebook events for the Policy Committee Meetings.

Hull didn’t say it, but it’s pretty obvious that if the County Commissioners didn’t get a chance for input to these study proposals, that’s not VLMPO’s fault; that’s the county’s own representatives didn’t tell their own Commissioners.

Commissioner Demarcus Marshall complimented the VLMPO and said he wanted to clarify that nobody on the Commission is anti-public-transportation; the issue is more one of communication and timelines. He wondered about the timelines for the studies, which could extend five or more years into the future. He wondered if there is any way to expediate public transportation faster than that.

Hull said he expected each study to take about 12 months.

After these studies, it’s really up to our community to decide how fast we can go. A public transit system for instance, you probably need to do it as quickly as possible: 12 to 18 months to be up and running.

Pritchard clarified that a road bypass project with GDOT and federal highway funding could take “10, 12, perhaps 15 years, from DOT”.

Hull agreed that road projects could take years, but public transportation could be much more quickly implemented.

Orenstein wanted to know the total cost of the studies.

Pritchard wanted to know the percentage of the VLMPO budget paid by local governments.

Answer: Lowndes County and Valdosta currently each pay 50% of the 20% match to the federal funds which are 80%. The state contributes a bit.

Pritchard wanted to know when the previous study was actually done.

Pritchard wanted to know whether the $125,000 for the new study included going back to the previous contractor.

Answer: federal requirements include doing a full RFP for a new study. However, whoever was hired would look at the old study, in the light of assumptions that have changed in the last five years.

Pritchard wanted to know about the 5316 federal jobs assistance program referenced in the old study: would it be applicable to the urban area.

Answer: those funds are no longer eligible from Congress. New version is 5307 program, from which comes the $100,000 for the study. The state of Georgia is holding $3 million from the federal government annually for the Valdosta urban area.

Slaughter wanted to know why implementation didn’t follow on the previous plan and what would be the cost now.

Answer: Valdosta City Council in June 2009 at the height of the recession voted to cut their budget and the Mayor at the time broke a tie to refuse funding for the transit system.

It was just a bad time to be starting it, with the economy at that time.

Hull didn’t say, but I distinctly remember people showing up at county commission meetings to oppose the bus system because they thought it would only be for Valdosta, and then-Chairman Ashley Paulk deliberately waiting for Valdosta to refuse it so the county wouldn’t need to vote.

Regarding costs, Hull said it was hard to guess, and the community should think not only of fixed bus routes, more along demand-response, which is what MIDS is, or like an Uber taxi service. Some numbers had to be penciled in, and $72 million over 25 years, with half from unidentified local sources.

Commissioner Joyce Evans gave a few details of how it didn’t work even before that last attempt.

Orenstein said his struggle was his family and friends say the taxpayers are going to have to spend $228,000 on a study. He said he wasn’t confident we had a plan. He wanted to know:

How do I argue that?

Hull said the scopes of work could be changed to help answer questions. But of course some things were unknown until the study was done.

Evans said the bottom line was the Commission needs to look at providing the funds for the study.

Pritchard wanted to emphasize Marshall’s point that nobody was opposed to public transit by noting for the past 15 years the only public transit has been the county’s MIDS service.

He asked someone whether MIDS was maxed out and got an inaudible non-response.

Marshall and others again thanked Hull.

Slaughter said once again that the request for study funding had been denied.

If in the future that there is a desire to revisit it, then it will have to come back and be added to the agenda for reconsideration.

Remember that part about the agenda when you see the LAKE videos of tonight’s Regular Session.