Solar is specifically called out for 2014 as a source of revenue increase. So is natural gas, but only because of a cost increase, and the cost of natural gas has plummetted since then, so it won’t be a revenue increase into 2015, while solar PPAs keep growing.

For 2013, two solar plants in other states are called out. Spectrum is a 30 MW plant in Clark County, Nevada, while Campo Verde is a 139 MW plant in Imperial County, California. Both are joint projects of Southern Power and Turner Renewable Energy.

Sure, they also mention 100 MW biomass Plant Nacogdoches, but it’s the only biomass plant SO has bought, and SO customer Austin Energy already soon got buyer’s remorse about that one.

Meanwhile SO kept up its far-away buying spree with Ted Turner, including (dates are announcement dates):

This is all according to SO’s own Solar Energy News web page, and those acquisitions are also detailed in the 2014 Annual Report.

But the web page shows a marked change in the most recent announced projects: they’re in Georgia!

Also note none of those Georgia projects are in conjunction with Ted Turner. SO has finally taken off the training wheels and has ridden back home to Georgia.

I wish I’d thought of that, maybe like two years ago at the 2013 SO Stockholder Meeting where I read from the Campo Verde flyer and the longer press release and noted:

I’m talking about building the economy, 239 million over the next 30 years to the local county, $17.5 million in local tax revenue, 250 construction jobs. Unfortunately, that’s in California.

However, we can have that right here in the Southeast, which is where I want to compliment Paul Bowers at Georgia Power because Georgia Power is helping connect two megawatts of solar power coming into Valdosta, Georgia, in the near future and perhaps some more. 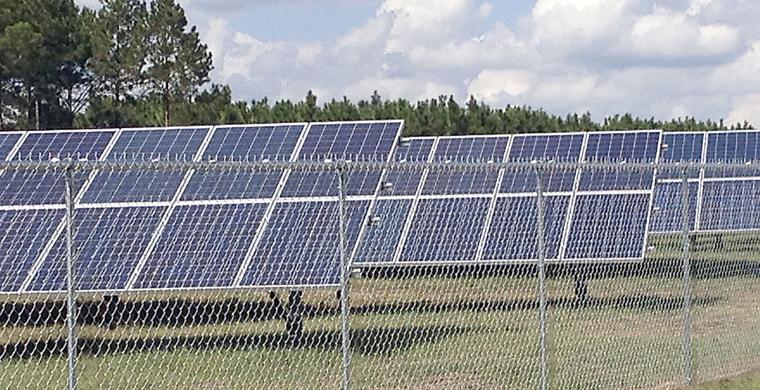 And the City of Valdosta’s added to its 0.3 MW Wiregrass Solar Plant another 1.25 MW at its Mud Creek Solar Plant, which presumably figured into that “increase in capacity revenues under existing PPAs”. Those two solar projects were the first two items listed for Valdosta’s award as Smart Energy Municipality of the Year.

In addition to those three 30 MW military projects, Georgia Power also did 30 MW at Kings Bay Submarine Base.

SO didn’t mention that last is because activists across Georgia persuaded GA PSC in July 2013 to require an additional 525 MW of solar power.

Also in that SO Solar Energy News web page:

And notice what’s not mentioned as a source of new revenue: Plant Vogtle, where for two years Georgia Power couldn’t even get a schedule from its own contractors, after it’s already about a billion dollars overbudget.

While solar projects go in on budget, on time, with reliable power production and revenue generation, plus no fuel costs, no pipelines, and no emissions.

Maybe Southern Company will look at its own revenue records in its own report and decide that fixing climate change is profitable? If solar growth like compound interest has turned even Al Gore into an optimist, why not SO?

Southern Company and Georgia Power and all the EMCs and MEAs did agree on solar financing bill HB 57, which unanimously passed the Georgia House and Senate. They did require limits on commercial distributed solar generation. But maybe that’s because our utilities are finally realizing solar is where their profit is, not just now, but far more so in the near future.

HB 57 was sent to Gov. Nathan Deal 6 April 2015. Sure, he took campaign contributions from multiple fossil fuel companies. But will even he refuse to sign a bill passed unanimously by both houses of the legislature, with overwhelming public support, and backed by all the utilities? The backlash might be very interesting in the next election if he did.

I suspect the clammy hand of the fossil fuel industry won’t be able to stop HB 57. And when it’s law, Georgia Power and Southern Company will likely move ahead even faster on solar power, adding to their bottom lines. That’s something shareholders like.