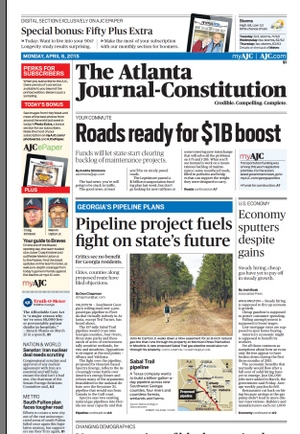 Regardless of route, Sabal Trail opponents fear pipeline construction could create sinkholes that drain streams or puncture subterranean waterways. Much of the ground below southwest Georgia is limestone that allows water to flow easily between streams, springs and wells. Leaks, they fear, could send gas into the water supply.

“Pipelines are the safest form of transporting natural gas,” responded [Spectra Energy Director of Stakeholder Outreach Andrea] Grover, adding that Sabal Trail would piggyback on existing gas and electric transmission lines for 70 percent of its journey through Georgia. “We want to operate a safe pipeline, stay in business and be part of the communities once we get there.”

We don’t have to settle for the least bad anymore. Florida doesn’t need any more natural gas, and even Ms. Grover didn’t try to claim any customers in Georgia for this article, even though Spectra attorneys are claiming exactly that in Leesburg.

“Atlanta is surrounded by fossil fuel invaders with more pipelines likely in the future,” said John S. Quarterman, a leader of the anti-Sabal Trail campaign in Valdosta. “But there’s no need for any of this now that solar power is cheaper, far cleaner than oil or gas and doesn’t require pipelines, terminals, compressor stations, eminent domain or environmental degradation.”

Spectra’s buying up land because it expects the usual FERC and state agency rubberstamp:

Spectra has cobbled together 20 percent of the needed easements along the main proposed route and cleared the land around the Albany pump station. Opponents say they’re not giving in.

“They want to pay you money for your land, but money is not just everything,” said Rosalyn Bridges, who owns 300 acres in Mitchell County. “Air and water can not be replaced. They are gifts from God, your creator. We have the Garden of Eden down here.”

You can help preserve our paradise. Citizen activism already got a Georgia solar financing law that will boost Georgia even higher than fastest-growing solar market in the country. Solar growth like compound interest will win, in less than a decade We just need to stop these last gasps of greed by 20th century companies from destroying our paradise before the carbon bubble pops.

PS: Thanks to Haley Hyatt for the front page picture. More here and here.