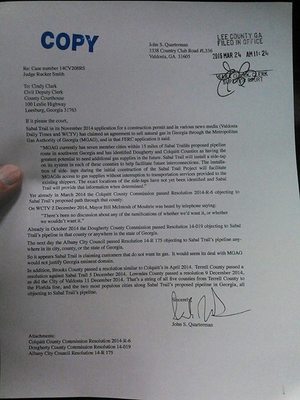 And it was pretty clear, at least to me (and remember I am not an attorney), that attorneys for both sides and the judge did find those resolutions relevant to the basic question of whether Sabal Trail provides gas “in the State of Georgia” and perhaps to a 2006 Georgia constitutional amendment that may give local elected bodies eminent domain oversight. See other post. Evidentiary briefs are being submitted, and amicus curiae are possible.

Here’s the text of the letter I sent. I’ve added links to the news stories and resolutions referenced.

If it please the court,

Sabal Trail in its November 2014 application for a construction permit and in various news media (Valdosta Daily Times and WCTV) has claimed an agreement to sell natural gas in Georgia through the Metropolitan Gas Authority of Georgia (MGAG), and in that FERC application it said:

‘‘MGAG currently has seven member cities within 15 miles of Sabal Trailâs proposed pipeline route in southwest Georgia and has identified Dougherty and Colquitt Counties as having the greatest potential to need additional gas supplies in the future. Sabal Trail will install a side-tap on its system in each of these counties to help facilitate future interconnections. The installation of side- taps during the initial construction of the Sabal Trail Project will facilitate MGAGâs access to gas supplies without interruption to transportation services provided to the existing shippers. The exact locations of the side-taps have not yet been identified and Sabal Trail will provide that information when determined.’’

Yet already in March 2014 the Colquitt County Commission passed Resolution 2014-R-6 objecting to Sabal Trail’s proposed path through that county.

On WCTV 2 December 2014, Mayor Bill McIntosh of Moultrie was heard by telephone saying:

‘‘There’s been no discussion about any of the ramifications of whether we’d want it, or whether we wouldn’t want it.’’

Already in October 2014 the Dougherty County Commission passed Resolution 14-019 objecting to Sabal Trail’s pipeline in that county or anywhere in the state of Georgia.

The next day the Albany City Council passed Resolution 14-R 175 objecting to Sabal Trail’s pipeline anywhere in its city, county, or the state of Georgia.

So it appears Sabal Trail is claiming customers that do not want its gas. It would seem its deal with MGAG would not justify Georgia eminent domain.

I also attached the Lowndes, Valdosta, and Terrell County resolutions.

2 thoughts on “Sabal Trail is claiming customers that do not want its gas, and city and county resolutions are relevant, it seems”