“Due to schedules, not all citizens can attend commission meetings,” Dukes said. “Hopefully the availability of the video will allow more people to see firsthand the information presented and discussed during meetings in the event they cannot attend.”

Golly, I wish we had thought of that! Oh, right:

This is not the first time that meetings have been recorded. The Lowndes Area Knowledge Exchange, run by John and Gretchen Quarterman, have recorded commission meetings, along with many other public meetings, for a number of years.

About four years, actually. Which is not long to nag a local government before they do it instead. And I see Carolyn managed not to get named again.

The website will also allow residents the opportunity to have public information such as bids, job offers and meeting information sent directly to them by email or on a mobile device.

Dukes credited the county commission for its directive and Amanda Smith, Lowndes County Information Technician, for the website, and her work to make the site useful to the public, and easy to use.

LAKE thanks the Lowndes County Commission and staff for putting videos of its own meetings online!

Here’s where you can find them. Go to lowndescounty.com, scroll down and click on Agendas & Minutes. Notice there’s a column labeled Media. Pick a date, currently only 9 December 2014, and click on the little TV icon in that row and column (I think it’s supposed to be an old-style broadcast TV set with rabbit ear antennas, for readers who are not familiar with antique technology). 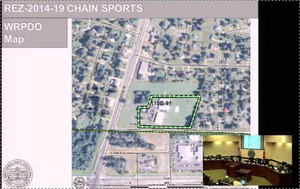 It’s one big 36 minute and 55 second lump, but hey, way better than nothing! Also notice a label appears in the lower left when each agenda item starts: that’s quite useful.

And the county has at least five cameras which you can see being used in their videos. These include three at the back of the room, and whatever is being projected on the screen behind the Commissioners, so you can actually see the maps they’re projecting. 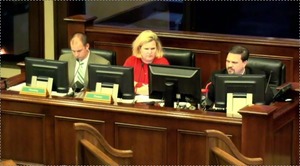 And a camera that can show Planner, Finance, and IT on the left. Including insetting them along with a map on the screen.

Plus one facing the podium where audience members speak. That’s right, no longer are you limited to the backs of their heads: you can actually see the audience speakers when they speak!

Perhaps the best part, they also have a camera on the staff on the right, Public Works, Engineer, and Utilties. No longer can the County Engineer hide behind hsi monitor when speaking! 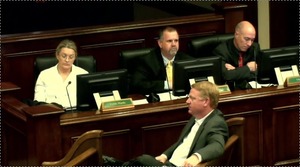 The Commissioners, for that matter, are fully visible despite their monitors, because the Commission’s cameras are mounted high on the wall, just below the ceiling. They’ve been there since the building was opened years ago. LAKE’s been asking ever since when they would be used to video meetings and put them on YouTube. Finally, it’s happening. See how much better the video quality is when it’s done by paid staff with multiple cameras in good locations instead by amateurs with one camera exiled to the back of the room?

Where is the county’s Work Session video, you may wonder? In the description on the YouTube page for the Regular Session, there’s this:

To view the Lowndes County Board of Commissioners Work Session Meeting on Monday, December 8, 2014 please use the following link: http://youtu.be/0s2Fo7aed5I

Also, immediately under the video title, there’s a link labelled Lowndes County Board of Commissioners, which leads to the county’s YouTube channel, on which you can see all their videos (so far only these two).

So, we’ll check videos off the long LAKE list of things Lowndes County could do for more transparency. Good thing I didn’t know about this Monday; I would have had to thank the county four times instead of just three (more on that later)….

But don’t worry, Paige, staff, and Commissioners, there are more things on that list!

In addition to the website requests Gretchen already made, let’s add a request for a list of times in each video for when each of those agenda items starts. That would make blogging much easier. To illustrate, item 7.b. Resolution Opposing the Sabal Trail Pipeline in Lowndes County is at 15 minutes and 40 seconds in the Regular Session video. For comparison, see LAKE’s video and writeup of that item, which includes a direct link to the LAKE video of the item, text about the high points of what happened, and a link to the resolution itself.

These county videos were posted 12 December 2014, which was the day the website went live. Can we see the videos of the Work Sessions posted before the Regular Session? Volunteer LAKE has been doing that for years, so no doubt paid county staff can do it.

For that matter, Glynn County not only posts online, it live streams meetings as they happen. Lowndes County could do that, too.

While Lowndes County still provides its agenda only in PDF form, many local governments provide a set of links from their agenda directly into their videos, item by item. Lowndes County could do that, too.

Oh, and how about press releases? The county might have seen their website in the Sunday VDT if they’d put out a press release on Friday.