Does the county ordinance that adversely affects Deep South Sanitation and no other company follow a pattern already set by the county? The VDT posted pictures clearly taken not from the media box during last night’s Regular Session of the Lowndes County Commission: this one shows Gretchen videoing for LAKE from that media box. Has the Lowndes County Commission granted an exclusive franchise to the VDT for photographing, like the one it granted to ADS for trash collection? Or has the Commission admitted its anti-videoing ordinance was actually an illegal bill of attainder directed at LAKE alone? If so, why is it still posted on the door? And why is the county still planning to sue Deep South Sanitation on account of an ordinance and contract that directly adversely affects no other business? Hm, could that also be an illegal bill of attainder?

In case you had any doubt the VDT’s pictures were taken during the actual Commission meeting in session, this one is of Steve Parker speaking in Citizens Wishing to be Heard.

Mr Quarterman, The County Commission wishes from this day forward that any filming be done from the media area in the back corner of the room. 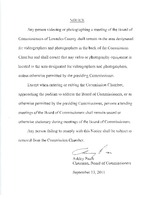 The next day, the Commission passed an ordinance that wasn’t on the agenda and wasn’t read to the public. In response to an open records request by somebody else, a copy of the notice that’s still posted on the meeting room door was returned. It says it’s a notice, not an ordinance. It reads:

Any person failing to comply with this Notice shall be subject to removal from the Commission Chamber. We already documented exceptions 11 October 2011 when several other people photographed and apparently videoed from various places in the room, with Chairman Paulk looking straight at one of them as she pointed her camera at him; that’s Commissioner Richard Raines to Paulk’s right. Now the VDT does the same thing.

In case you’re wondering, the pictures I took 14 May 2013 were before the meeting started, as you can tell by Commissioners still wandering around the room. LAKE has been careful to scrupulously follow the notice or ordinance or whatever it is.

And it appears that nobody except LAKE is required to follow that ordinance. Which brings to mind this:

“No Bill of Attainder or ex post facto Law will be passed.”
—U.S. Constitution, Article I, Section 9, paragraph 3

A bill of attainder is “A legislative act that singles out an individual or group for punishment without a trial.” Founding father James Madison, who probably wrote that clause, said in Federalist number 44, 1788:

“Bills of attainder, ex post facto laws, and laws impairing the obligations of contracts, are contrary to the first principles of the social compact, and to every principle of sound legislation. … The sober people of America are weary of the fluctuating policy which has directed the public councils. They have seen with regret and indignation that sudden changes and legislative interferences, in cases affecting personal rights, become jobs in the hands of enterprising and influential speculators, and snares to the more-industrious and less-informed part of the community.”

Hm, “impairing the obligations of contracts” as in Deep South Sanitation’s contracts with its customers? And “jobs in the hands of enterprising and influential speculators” like the investors from New York City that own ADS? As Steve Parker put it:

…taking a family-owned Lowndes County business that pays taxes in Lowndes County, and moves that money to a company headquartered in New York.

We know the county plans to enforce what could well be an illegal bill of attainder against Deep South Sanitation, because the Chairman refused to even explain the civil action lawsuit against DSS with preliminary hearing 14 June 2013 at 9:30 AM. Congratulations, DSS, on joining the club of very few organizations that’s had the Lowndes County Commission pass an ordinance against it!

Is this the kind of local government we want, whose “sudden changes and legislative interferences, in cases affecting personal rights” affect specific individuals or groups?