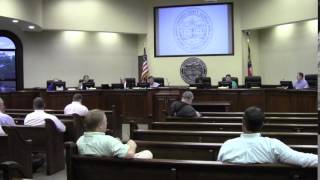 The county’s response to the weekend storms (straight-line event, not tornado) was less confused than its proposed board appointments. They vote Tuesday evening at 5:30 PM, including on the budget.

Likely return of Ray Devery to the Library Board as Chairman, and reappointment of Barry Barr. Sheila Wakeley for the South Georgia Community Service Board, but even the Commissioners had no bio for her. John Sineath for Valdosta-Lowndes County Construction Board of Adjustments and Appeals, even though Valdosta’s web page says he’s a city appointee. None of the applicants spoke.

A grant for help getting a grant, re-evaluation of all rural agricultural tax assessments, the annual mosquito testing contract with VSU, and the landfill public hearing clarification item apparently is about the hearing of the public notice already posted for 17 July 2014.

Here’s the agenda, with some notes, and links to the videos.