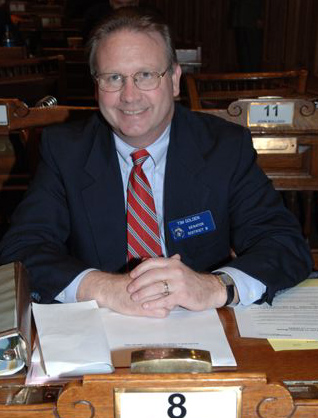 The Lowndes County Commission hosted Sen. Tim Golden and House Representatives Amy Carter, Ellis Black, and Jason Shaw to discuss the needs of the county in preparation for the next Georgia Legislative session.

The Local Option Sales Tax (LOST) and the earlier qualifying and primary dates for Georgia representatives were among the items discussed.

Commissioners requested that the representatives help to re-enact the original LOST referendum where the revenues would be based upon population and to show the reduction of property taxes on the bill as a credit against the amount of property taxes owed.

“It’s a struggle between the Association of County Commissioners of Georgia (ACCG) and the Georgia Municipal Association (GMA),” Ellis Black said. “It should be based on the value of the property, not the population.”

That article includes a long list of items “the Lowndes County Commission wants the representatives to look at”, including The Motor Fuel Excise Tax Exemption, Bridges and Off-system Bridges, SPLOST VII (buried in the item on bridges), Libraries, Annexation/De-annexation, Alcohol Beverage Tax, taxing online purchases, and no less than four items related to incarceration: Inmate Heath[sic] Care, Juvenile Justice Reform, Magistrate Court Fees, and Assume Full Financial Responsibility for State Prisoners. Yet there’s no publicly-visible agenda. And that list does not include anything about the proposed Sabal Trail methane pipeline.

This one is pretty rich:

Yet the county government sees no problem with spending money on legal fees to sue a local business, and losing. Let’s see a number on how much that cost.

I do agree with the county about this one, though:

And I agree with County Chairman Bill Slaughter on this one:

Local citizens might have wanted to see this meeting, or even have a chance to talk to their state legislators. But no worries. Transparency is not a problem. Chairman Bill Slaughter said so.