Now EPA is convinced that the public wants answers, after dozens of citizens turned out to ask questions at Waycross City Hall 14 November 2013. A study of contamination sampling is in peer review, and GA EPD and GA Health Dept. are also involved. Citizens and silentdisaster.org and Satilla Riverkeeper and WWALS Watershed Coalition are watching.

Roger Naylor, Public Relations Director for Southeast Health District, is quite familiar with Janet McMahan’s discovery of arsenic in groundwater and says

Jane Perry of the state health department is in charge of peer review for the contamination sampling that EPA’s Matthew Huyser mentioned; see below. That’s the same Jane Perry who eventually confirmed enough evidence that health districts across south Georgia recommended 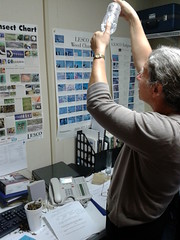 Matthew J. Huyser, On-Scene Coordinator for U.S. EPA, told me the main purpose of the meeting was to determine whether there really was citizen demand for answers, or was it just a handful of very vocal people. His conclusion: yes, there were many citizens who wanted answers and action. Plus he wanted to inform citizens that sampling has been done and is still going on, and a study is forthcoming. See also separate post about EPA and the Lowndes County landfill.

Sherryl A. Lane, Community Involvement Coordinator, EPA, who was cited in Enterprise online as the EPA contact for that meeting. See also separate post about the Lowndes County Pecan Row landfill.

This meeting was requested by Joan Martin McNeal and the other organizers of SilentDisaster.org (facebook). She was continually encouraging citizens and questioning the government officials. She expressed some disappointment that there was no formal presentation and no opportunity for the officials to answer questions where everybody could hear all at once. EPA’s Huyser did indicate there would be followup meetings.

This is serious business. Many people are getting sick and dying in Waycross. People want to know why.

Persistently questioning each government official was Ashy Nix, the new Satilla Riverkeeper. She is the contact for Georgia Water Coalition’s Dirty Dozen 2013 about the Seven Out Superfund because it’s on that list:

Lurking within Mary Street Park, a tree-lined neighborhood park in Waycross, is a silent killer—toxic pollutants from a defunct industrial wastewater treatment facility known as Seven Out Tank. Opened in 2002, the industrial waste handler operated only two years before multiple environmental violations led to the facility’s closure. Now, after eight years and a U.S. Environmental Protection Agency (USEPA) supervised cleanup of the industrial site, contamination still threatens the health of local residents, municipal drinking water supplies and tributaries to the Satilla River.

Also met there but not in the above meeting picture: GA Rep. Ellis Black District 177 State representative Jason Spencer District 180 and GA state Rep. Ellis Black (district 174). This is where Black confirmed he was coming to the SpectraBusters meeting against the Sabal Trail methane pipeline.

When contamination gets into a watershed, whether from a hazardous chemical “cleanup” company or a railroad or a pipeline, it tends to spread into the aquifer, drinking water, wetlands, and rivers, and maybe even into the air. Perhaps EPA will be more thorough this time.

Joan Martin McNeal of silentdisaster.org, Satilla Riverkeeper Ashby Nix, and I (in my hat as a director of WWALS Watershed Coalition) were the last citizens to address EPA’s Matthew J. Huyser, reminding him: we’ll be watching.