People are tired of irresponsible trash government at the state level colluding with monopoly utilities to hold Georgia back in distributed solar power, and some of us are doing something about it; you can, too.

I am seeing Georgia’s nuclear financial woes starting to prompt a boon for distributed energy including solar, wind, biomass, geothermal, low-impact hydro, high efficiency cogeneration, and other sources of electricity.

Biomass? Let’s not go back to that carbon-polluting forest-destroying factory-exploding waste of time and resources. Solar, wind, efficiency, and conservation are the main events, with solar increasingly leading the pack. And those nuke cost overruns are already driving solar up even faster:

In fact, the potential financial hit is so bad, that the AARP, the Georgia Solar Energy Association, the Georgia Tea Party, and other unlikely bedfellows have found common ground — in solar energy. The main driver uniting these unlikely allies is a mutual dissent with the public utility’s lock on their energy choices.

In this case, Georgia Power’s desire to build an expensive nuclear plant rather than explore other, more reasonable options has prompted widespread resistance.

Whatever the reason, the antipathy to the local government sanctioned monopoly utility company has created an opening for solar PV (photovoltaic). And it is precisely this burning desire by the people for choice that has elevated solar PV demand.

With radical cost reduction in solar PV, we are on the cusp of something truly transformational, a moment where electricity customers can generate electricity at a lower cost than the electricity provided to them from the government sanctioned monopoly utility company.

The writer maybe doesn’t realize just how transformational solar is going to be, because unless you’ve studied previous exponentially-growing industries like PCs, the Internet, and mobile phones, even with all the evidence, it’s hard for many people to believe even how disruptive rooftop solar already is to the cozy century-long baseload-monopoly electric utility industry. The writer attempts to equate solar to other power sources:

But it is not just solar. Solar PV will be joined by wind, geothermal, low-impact hydro, high efficiency natural gas cogeneration, and other sources of electricity. The reason we focus on solar PV is not that it is “the answer” for all power, but it so succinctly summarizes the difference between the corporate power of the utility and the desire on the part of ratepayers for freedom of choice in the energy market.

So, if energy choice is the driver, the question is: “What’s the future for solar in Georgia?” If it is not the end-all savior, what is its role and how big can it become?

Today the lowest cost installations in the United States would make solar cost effective without state incentives in Georgia. The partnership between the odd bedfellows of the Tea Party and the environmental organizations has resulted in a 525MW solar mandate for Georgia Power.

Georgia Sierra Club and national Sierra Club have been opposed to coal and nukes for years and for solar and wind. I’m a Democrat, and I and other Democrats spoke for solar power at GA PSC before that decision, along with many others of all political stripes. Just because the media have fixated on a single name doesn’t change that reality. Is there any Georgian who doesn’t want jobs for Georgians? Who doesn’t want lower rates for customers? Who doesn’t want clean air and water for themselves and their children?

Doubling Georgia Power’s tiny ( less than New Jersey) is just a tiny baby step. Georgia Power still operates the dirtiest coal plant in the country at Plant Scherer near Macon while Southern Company operates that plus #2 Plant Miller in Alabama.

This amount of solar PV is more than enough to produce 0.5 percent of total electricity while allowing Georgia installers to match the best practices necessary to achieve cost effective solar PV by 2016. All the while, electricity rates in Georgia will keep going up. Why? The nuclear power plant is not yet completed and won’t be until at least 2020. 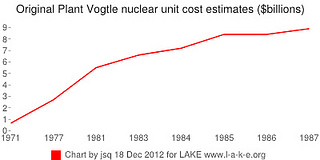 Yep, GA PSC abdicated cost oversight for those new nukes for years to come, while Georgia Power continues to get a rate hike about once a year. Remember last time, 30 years ago, Plant Vogtle nukes costs blew up more than 20 times the original estimates.

And it’s not just nukes: natural gas rate hikes are also on autopilot. That’s a big reason natural gas is not going to be a long-term leader in Georgia: it costs too much. Monopoly utilities do indeed levy “an absurd tax upon the rest of their fellow-citizens”, as Adam Smith remarked more than 200 years ago.

In the end, most Georgians are not motivated by low-carbon resources, they are driven by choice. They are driven by the “hedge-value” solar PV provides against paying for the mistakes made by the local government sanctioned monopoly utility company.

And then there are the proven the radiation-lying document-forging parts of the nuclear industry, some of which supplied parts for Georgia Power’s new Plant Vogtle nukes.

Dr. Sidney Smith, a dermatologist and a longtime solar investor, has called solar the “new cotton of the South.” Time will tell whether solar will live up to the economic power of “King Cotton,” but we can safely assume that no one will be praising nuclear that way anytime soon.

We need to insist on Georgia Power leading Georgia and Southern Company leading the southeast, the country, and the world in deploying rooftop solar and offshore wind, for jobs, for lower rates for customrs, for profit, and for clean air and water for all Georgians.