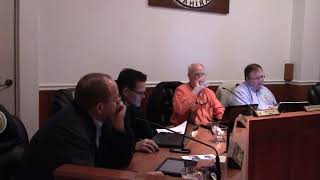 The Hahira City Council passed two resolutions at its February 1, 2018 Regular Session, one supporting GA HR 158 to stop state fee diversions, and another supporting the Withlacoochee and Little River Water Trail. Two days before I spoke about both and there was discussion at the Hahira Work Session of January 30, 2018.

Another item from that Work Session has unfortunately become big news: possibly closing the Lawson Street railroad crossing, where a man was killed February 5 when a Norfolk Southern train struck a dump truck, according to WTXL. WALB says, “The Georgia State Patrol identified the driver as Dexter Brown, 48, of Barnwell, S.C.”. Mayor Bruce Cain gave a statement to Hahira Today, which also included some discussion of that agenda item:

The topic of closing the railroad crossing came up in the city council work session last week after Norfolk Southern offered the city of Hahira $40,000 if they willingly close the Lawson Street railroad crossing.

However, if they were to vote against the request to close that property then Norfolk Southern plans to go forward with the closure and the money would no longer be an option. This is a discussion that the city of Hahira has been having with Norfolk Southern for quite some time.

“I don’t know if it will be a factor or not. The council members of course hate that anything like this has happened, but they still have to look at the community views,” Cain said.

“The crossing is a little bit elevated, but it is not as raised as the crossing North of Lawson, which is Stanfill Street and that one is really elevated but it does have the gates and all the safety precautions there for that one,” Cain said.

All the crossings in town have safety precautions in place except for the crossing at Lawson Street. According to the mayor, a lot of people don’t take the Lawson Street crossing because they feel it is just too dangerous.

“It was mentioned at the work session that there was a fatality there back in 1996 and then there was another incident with minor injuries in 2008, and of course now a fatality this year. I can’t really say how the council will weigh the situation,” Cain said.

Here are links to the LAKE videos of the Hahira Work Session of January 30, 2018, followed by a LAKE video playlist. Apparently the camera operator had slippery fingers, because videos of the early agenda items are either truncated or missing. However, several of the more interesting discussions are here.