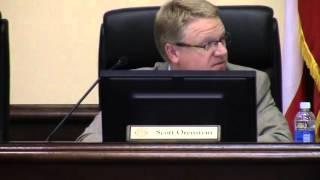 Landowners who did take the money mostly did not have an attorney such as the one those Commissioners pay hundreds of thousands of dollars a year. These local businessmen who voted last night apparently forgot what the only elected body that represents all of Lowndes County unanimously said a year ago: “The Lowndes County Commission has concerns with fundamental property rights and does not believe that citizens with small tracts should be forced to lose the use of large portions of their property for the Sabal Trail pipeline.” Considering the testimony the county’s attorney gave last night, the other landowners were probably better off without it. In any case, the Chairman explicitly said local landowners are on their own, before he went into a back room with Sabal Trail to hand over a signed easement agreement in exchange for thirty pieces of silver.

Below are links to each LAKE video from last night’s Regular Session, followed by a video playlist. See also the LAKE videos from yesterday morning’s Work Session and the letter of yesterday from WWALS the the Commissioners.

Commissioner Clay Griner, who earlier said on the telephone he didn’t want to argue about it, stopped in the door on the way out to argue with me. I pointed out, as I did yesterday in a letter as president of WWALS Watershed Coalition, that the Commissioners could have helped stop pipeline permits by asking state and federal elected officials to do so. He answered “I don’t think so” and went out the door.

Afterwards I congratulated Spectra Energy’s Brian Fahrenholdt for turning another one, noting at least he’s doing the job he’s paid for, unlike some others in the room. For example, the county attorney whose answers led many to believe eminent domain could be invoked right now, when he knows full well FERC hasn’t issued a permit, so there is no federal eminent domain. (One could argue about Georgia eminent domain, because of several cases where Sabal Trail has sued local landowners and judges have granted survey access. But none of those cases apply to any other landowners, and even Sabal Trail has repeatedly said they’re only about surveying, not about right of way easements. So Sabal Trail does not have state eminent domain over that county land, either.)

The attorney fell back on the precise wording of his statement, which he alleged only said there was a risk of eminent domain. Listen for yourself to what he actually said:

Bear in mind Sabal Trail has the right of eminent domain…

Maybe the county attorney, whom I have heard is a church elder, should read the rest of Exodus 23:2:

nor shall you testify in a dispute so as to turn aside after a multitude in order to pervert justice.