For most of June, Georgia Power has had two ads rotating on the

Giving you the power to go solar —Georgia Power

When? Tomorrow, July 1st, as Southern Company CEO Tom Fanning said at the SO Stockholder meeting 27 May 2015. Why then? Because that’s when HB 57, aka the Solar Power Free-Market Financing Act of 2015, goes into effect. As Tom Fanning has made his mantra since that meeting:

“If somebody wants to buy distributed generation, I want to sell it to ’em,”

“We expect to have a new customer solar program ready by July 1, 2015, where we will sell solar installation services to customers through an unregulated business unit,” Georgia Power Spokesperson John Kraft said. “We don’t expect leasing to be a part of this offering.” But, Kraft added, the program’s structure and payment options are still in development.

Solar advocates backed the law’s passage because it allows Georgians to install solar “using a financing mechanism of their choice, including financing mechanisms such as leases and solar energy procurement agreements, in which payments are based on the output of the system,” according to Steve O’Day, head of the Environmental and Sustainability Practice at Georgia law firm Smith, Gambrell & Russell.

It also limits residential third party financed systems to 10 kW and TPO commercial installations to no more than 125% of the host site’s peak demand, O’Day explained. And it makes clear that third party owners who transfer the solar generation to system hosts are not electric utilities.

Installers approve of the law

No word yet whether SolarCity will move into Georgia.

And yes, Georgia solar installers are right to be worried about Georgia Power trying to own distributed generation. We shall see whether the titanic utility can be more nimble than the hundreds of pre-existing solar installers, now that they also are no longer constrained by financing.

There’s a lot more in that article, including this quote from “Sam Hilley, a spokesperson for Georgia engineering, procurement, and construction firm Radiance Solar” which focuses on “industrial-scale solar installations”: 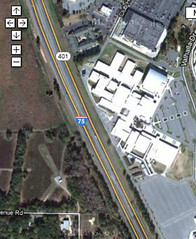 “We can now go to a school or another non-profit entity and put solar on the facility at no upfront cost, sell the power under a fixed cost long term PPA, and, since solar has no fuel cost, offer immediate savings on what they pay for electricity.”

It’s time for solar Lowndes High School! And there’s no longer any excuse for lack of solar panels on the Lowndes County Palace. Or on Valdosta City Hall parking lots.

This move into solar by Georgia Power and Southern Company is one of many reasons the recent Supreme Court decision requiring EPA to provide cost-benefit analysis for its coal-emissions rule is less significant than it may seem. The sun is rising, and even the Supreme Court can’t stop it.

Those billboards point to georgiapower.com/solar/, which I suppose will be updated tomorrow with how to buy rooftop solar power from Georgia Power.

Gretchen took these pictures 10 June 2015. I started to crop out the power lines, but then it occurred to me they were relevant.

Whether it wants to admit it or not, Georgia Power is starting to do what AustinEnergy did back in 2003: deploy new electricity generation through distributed rooftop solar power. Only a dozen years later, the titanic ship of Southern Company is finally turning towards the sun.