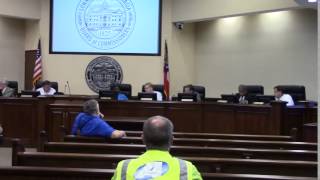 See the LAKE video below, the WALB story by Colter Anstaett including interviews with Cary Scarborough of Deep South Sanitation and Steve Edwards of Advanced Disposal Services. The county actually posted the resulting Solid Waste Ordinance on their County Ordinances web page (although I don’t see the updated franchise agreement anywhere), and they even posted the results of that meeting. Neither the county’s results summary nor WALB mentioned Commissioner Marshall’s question about recycling glass nor Chairman Slaughter’s response that glass can be disposed of as ordinary trash, which means they’re not going to recycle it.

Here’s the paper agenda from the meeting and the county’s results summary: 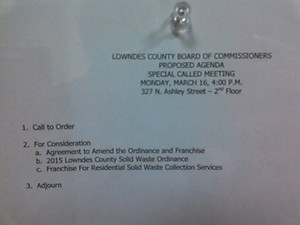 As a result of the Special Called Meeting the following documents were passed: 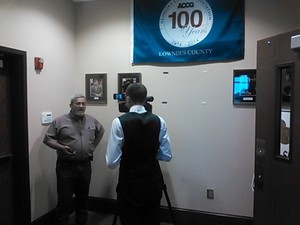 Also, the Lowndes County Board of Commissioners is currently accepting applications for nonexclusive franchises to provide residential solid waste collection services for the unincorporated area of the County pursuant to the 2015 Lowndes County Solid Waste Ordinance adopted March 16, 2015.

The form of an Application for such a nonexclusive franchise and a copy of said Ordinance may be obtained from the office of the Board of Commissioners located on the third floor of the Administrative Building of the Lowndes County Judicial and Administrative Complex located at 327 North Ashley Street, Valdosta, Georgia. 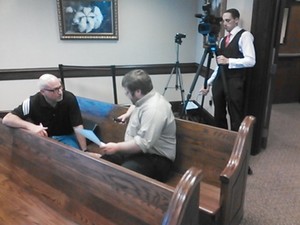 Summary of Ordinance and Franchise

That summary doesn’t mention that ADS, as the operator of the landfill, can charge itself whatever it likes and charge something else to other franchisees, which makes it questionable whether another applicant such as Deep South Sanitation can compete. 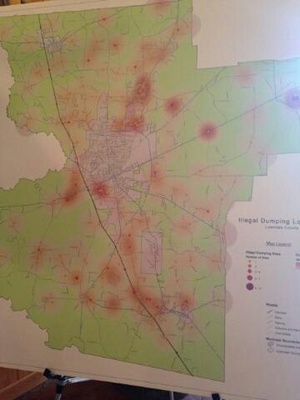 This was at a meeting on their calendar, but no agenda, it’s another Special Called Meeting-Solid Waste Management. They did not talk about illegal trash dumping. We still don’t know why it couldn’t wait until their regular meetings the next week, or why it took almost two months to get back to this after the two meetings in January.

They did talk about solid waste management at their 5 February 2015 retreat, and the Chairman’s first goal the next day was Solid Waste. But neither the public nor the principal parties, Advanced Disposal Service (ADS) nor Deep South Sanitation (DSS), were permitted to speak at that retreat.

For that matter, there are still no minutes for either of the two January Solid Waste Special Called Meetings or for their February Annual Planning Meeting, although they have finally caught up with minutes for their Work Sessions and Regular Sessions.