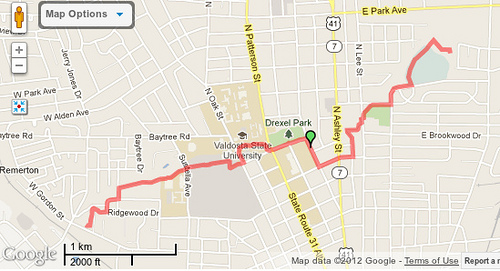 paving or widening a road, even though there’s no obvious direct return on investment. The less tangible returns, alleged safety, ease of commute, and future development, all are served just as well or better through public transportation and green corridors.

VLPRA has already demonstrated that parks can bring in jobs directly through softball and baseball tournaments. Linking up some more parks through greenways and blueways could improve local quality of life still more and help attract and retain the sorts of businesses the Chamber and the Development Authority want. Valdosta recently was named “Smart Energy Municipality of the Year” for a list of accomplishments including phasing in LED streetlights for the night. I wonder what awards local governments could win for green corridors for the day?