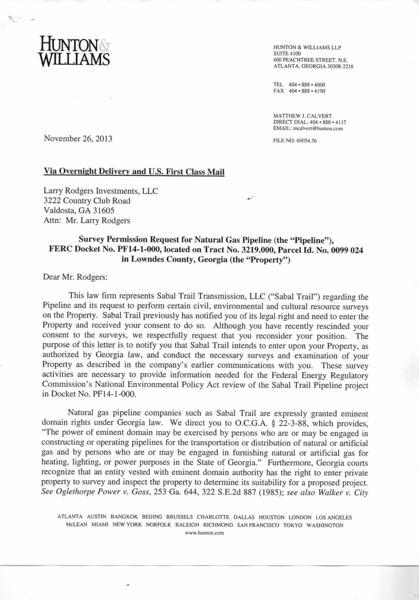 Property owners state that these letters contradict a recent statement by Grover to the Times that accusations that they had been threatened with eminent domain on their properties was “hard to believe.”

“I would really disagree with any of those accusations,” Grover said.

However, several property owners shared a form letter that was sent to them by Sabal Trail, and their representing law firm, Hunton & Williams.

The VDT article also quotes from the 4 December 203 response by Valdosta attorney Bill Langdale on behalf of Larry Rodgers, extracting from this part:

“The code section would appear to require Sabal Trail to actually furnish the natural gas in the State of Georgia as a condition of exercising eminent domain rights in Georgia. As Sabal Trail’s proposed use does not appear to furnish any natural gas in the State of Georgia, it is not authorized to exercise eminent domain rights pursuant to O.C.G.A. 22-3-88. Therefore, even if Sabal Trail obtains and furnishes my client with a Certificate of Public Convenience and Necessity, it is our opinion, based on information we currently have, that Sabal Trail would not have the right to exercise eminent domain, and any entry on our client’s Property would be an unauthorized entry. ”

More than a dozen opponents from south Georgia and Florida were eye witnesses to Andrea Grover sitting there at the time, and can attest she was one of the leaders of the Sabal Trail team in the courtroom. I greeted her as the entered the building. She was interviewed by WALB TV, as you can see in this screenshot of her bald face. Yet she claimed to the VDT that Sabal Trail threats of eminent domain where “hard to believe”.

This is hardly the first time Sabal Trail has asserted things that are not true. Here are some more examples, all of which the VDT is aware of.

Now that the VDT has documented that Sabal Trail, ah, let’s try to be as delicate as the VDT was, um, asserted something that was at the very least misleading given the extensive documentation about the facts of the matter, who exactly is “hard to believe”? 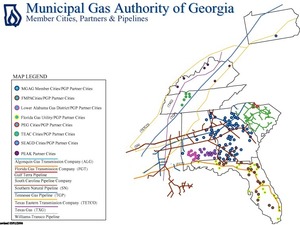 And if Sabal Trail isn’t interested in Georgia eminent domain, why is it trying so hard to come up with a Georgia customer that it got MGAG to agree to that without even contacting the local governments Sabal Trail claimed would “need” the gas?