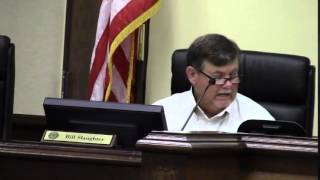 Twelve minutes. When do they actually talk about things? They vote Tuesday at 5:30 PM. “Hahira’s Extraterritorial Request” is for water and sewer for John Bailey. “Rezoning case REZ-2014-15” is also about water and sewer. The other obscure public hearing is to fix something county staff didn’t do correctly back in June.

Yes, it’s the old white guy to replace the young black woman on the Planning Commission, and it’s Commissioner Joyce Evans for the Georgia Department of Behavioral Health and Developmental Disabilities. And yes, it’s the annual renewal of hiring prisoners from Valdosta State Prison.

Here’s the agenda with links to the videos and some notes.