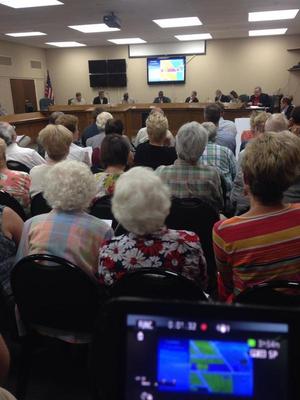 Stuck in the foyer six deep because SRO in the Planning Commission tonight, mostly for the Turner Brooks item, back with another plan after being withdrawn last month. Tom Call, representing some of the owners of the property sellers, said they’d tried to meet with the neighbors, who refused. He didn’t say whether they tried meeting with them one-on-one. GLPC could have put a bunch of conditions on it that would have mostly satisfied the neighbors’ concerns, leaving the developers and sellers to decide whether it was worth it. Instead, they tabled. The Valdosta City Council can still decide if they want to. However, one of the houses they’d have to demolish is potentially on the National Historic Register, and if so, they can’t tear it down.

Also, they only submitted one name for the County Commission to consider for appointment to GLPC; attorney Brad Folsom. They didn’t include several potential women applicants, several of them attorneys, and yes, also Gretchen. As an old white man, even I find it impressive how much this area is run by old white men.

The agenda arrived only as images Gretchen took at the meeting. Videos to come.