And the Nova Scotia government listened. Bruce Erskine wrote for The Herald Business 3 September 2014, Nova Scotia to ban fracking, posting a video in which you can hear Energy Minister Andrew Younger say: “Nova Scotians have indicated that by a wide margin they are concerned about hydraulic fracturing and they do not want it as part of onshore development of shales in Nova Scotia at this time,

“Nova Scotians have put their trust in our government, that we will listen to the concerns and not allow a process that most Nova Scotians are just simply not comfortable with at this time.” 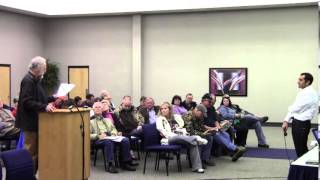 We’ve seen the same thing in the Sabal Trail Open Houses and the FERC Scoping Meetings for the Sabal Trail pipeline: overwhelming public opposition to the pipeline. With FERC representatives standing right there.

A few local governments have started to listen:

Yet resolutions and letters don’t have the force of law. Land-use ordinances do, such as the one Jefferson County, Florida ordinance 2011-072111-02 of 6 October 2011 to prohibit extraction of local water for bottling.

A citizen of Suwannee County has written a letter to county commissions recommending that Jefferson County ordinance as one of several precedents, including resolutions passed by counties in Virginia against another Spectra pipeline that were at least stronger than the Georgia county ones, and that were followed in less than a month by Spectra “suspending” that Virginia pipeline.

The letter is co-signed by many organizations, including the Suwannee Alliance For Sustainable Growth, Our Santa Fe River, SpectraBusters, Inc., and WWALS Watershed Coalition, Inc.. Our Santa Fe River and WWALS are both of the currently-active watershed conservation nonprofits representing rivers in the Suwannee River Basin. WWALS, which has posted its own message of support for local legislation, represents the Withlacoochee River, which the Sabal Trail pipeline still plans to cross at the Brooks-Lowndes County border just south of US 84.

Although one of the directions FERC just gave Sabal Trail was to look at:

Translation: Alternative 1 runs right through Tifton, Adel, Hahira, and Valdosta down I-75 and on through Florida past sinkhole-prone The Villages. There’s a FERC-required Alternative 2 that does the same thing. And an Alternative 4 that bashes through Americus, Cordele, Ashburn, and CHula before hitting Tifton, Adel, Hahira, and Valdosta. And an Alternative 3 that goes therough Camilla, Thomasville, and Monticello, FL to Capps, FL, before turning east along the existing Florida Gas Transmission (FGT) route.

The only Sabal Trail route that does not pass through Lowndes County is that Alternative 4. Which makes Lowndes County a key to stopping the pipeline.

What will the Lowndes County Commission do? And the County Commissions of Cook, Tift, Turner, Crisp, Sumter, and Thomas Counties in Georgia, and Jefferson County, FL? And the city councils of Valdosta, Hahira, Adel, Tifton, Ashburn, Cordele, Americus, and Thomasville? Whom do you serve? We hope it’s your local citizens.

And what about the legislatures of Florida, Georgia, and Alabama?