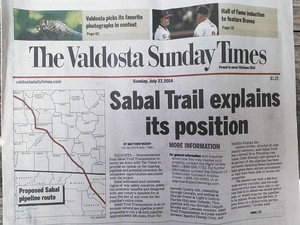 My favorite is this:

“We still have, in working with the landowners and the communities, some reroutes that we’re looking at, and obviously you kind of need to draw that line in the sand and turn in something….”

A company from Houston, Texas comes here wanting to cut down local trees, take a hundred-foot right of way through our fields and wetlands, and dig under our Withlacoochee River, for its corporate profit, and it acts like it’s the victim and we the locals are being mean to it.

How about we tell Spectra to get back on its high horse and ride back to Houston, while we put up solar panels to reflect the tails of their horses?