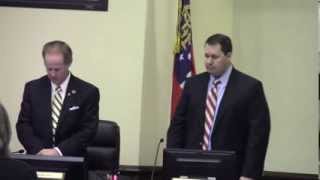 The County Manager’s report was about FERC’s Scoping Meetings starting next week; two citizens spoke about the pipeline. The Chairman refused to let another one speak because she hadn’t turned in a form, and then he spent 20 minutes after the meeting telling her what the county wasn’t going to do.

We sort of found out where is the unopened right of way off of US 41 South. The special tax lighting districts item went quickly this time. We found out how much the county’s sewer lift station at a subdivision with a private golf club will cost to replace. This is the subdivision for which the Nelson Hill Wells were drilled as possible replacements.

Here’s the agenda, with links to the videos and a few notes. See also videos from the previous morning’s Work Session.