Spectra flip-flops on major safety events as well as on whose houses are beautiful and whether Georgia cities can use gas from its pipeline from PCB-polluted Anniston, Alabama to Orlando, Florida. And Spectra was fined recently for violating both federal safety requirements and its own operating procedures, including for pipeline monitoring. Oh, and its natural gas comes from fracking.

Spectra Energy Corporation (SE, NYSE) was forced to backtrack on dismissive assertions it made about a nighttime incident at its huge natural gas compressor station in Bedford County, PA, after persistent neighbors and a reporter kept pressing the company and state regulators for facts.

A natural gas compressor station, like the ones Spectra says will be along its proposed AL-GA-FL pipeline, maybe in Dougherty County, maybe in Lowndes County; we don’t know.

It’s still a compressor owned and run by Spectra Energy. And it’s a reminder that the natural gas for that pipeline through Georgia comes from fracking, destroying somebody else’s groundwater. And judging by this Spectra flip-flopping safety event, maybe ours, too.

Spectra Energy’s initial response was autocratic and dismissive: “Nothing was released. There was no smoke. No incident.” This was from Marylee Hanley, a “Director of Stakeholder Outreach” located nearly 500 miles away in the greater Boston area.

Remember that when you hear promises to Dougherty County:

Brian Fahrenthold, the state and local government affairs director for Houston-based Spectra Energy, assured commissioners and landowners impacted by the pipeline that his company will “meet or exceed all safety standards” required by federal officials during construction of the $3 billion project that will, when completed, send 1 billion cubic feet of natural gas per day into Florida from central Alabama.

Read even that closely: “during construction”. He didn’t even say Spectra would meet safety standards during operation.

Remember it when you see the VDT report from talking to Andrea Grover, Public Affairs Representative from Spectra Energy,

Safety is a huge factor when it comes to a project of this magnitude. Since the Southeast is prone to hurricanes and tornadoes, Sabal Trail considered that, and said their pipeline will be made to withstand those events. Also, the pipe will be monitored 24/7. The monitoring system will be fitted with sensors which would detect leaks. The pipeline will have shut-off valves that will be shut off remotely in the event of a leak. Sabal Trail will walk the pipeline regularly checking for anomalies, such as the changing of the color of the grass, which is an indicator that the pipe requires maintenance at that location. 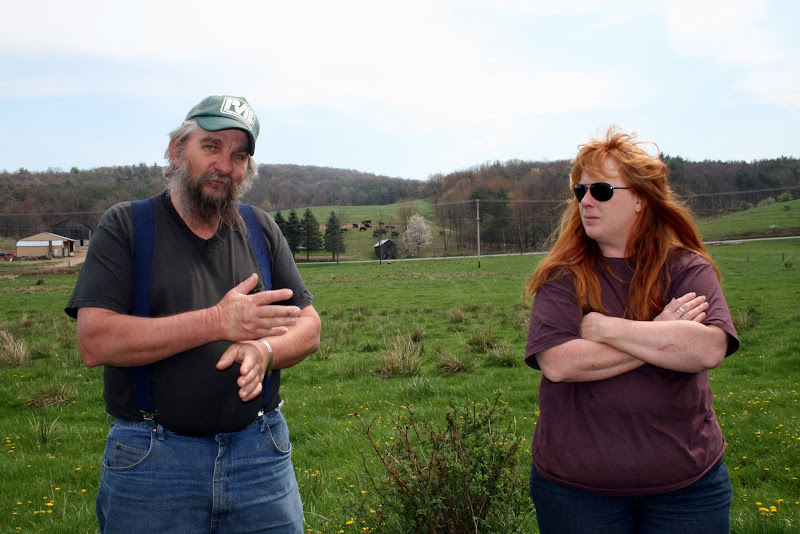 Then the story began to change, thanks to the persistence of nearby Property Owner Angel Smith and Associate Editor Elizabeth Coyle, of the Bedford Gazette.

They kept the pressure on Spectra Energy and the Pennsylvania Department of Environmental Protection (DEP). With its initial “no incident” response crumbling, the company apparently substituted a different Director of Stakeholder Outreach from its Houston headquarters.

This one, Andrea Grover, admitted what the Pennsylvania DEP had already acknowledged: There was a release of methane and other hydrocarbons; but so far the company refuses to say how much.

That’s right, Andrea Grover is sent from Houston to Pennsylvania or Georgia to calm the unruly locals.

But as reported in the Bedford Gazette, Spectra Energy is legally permitted to emit literally tons of pollutants per year from this single facility. For example: 50 tons annually of volatile organic compounds; 25 tons of hazardous air pollutants, according to the DEP.

Makes you wonder about those safety standards required by federal officials for the pipeline, doesn’t it?

Whatever those standards are, Spectra often has not met them:

Timing is everything in life. As it turns out, a large socially responsible investor group, Trillium Asset Management, with over $1 BILLION in assets under management, has filed a shareholder resolution requesting a report from Spectra Energy’s Board of Directors on its fugitive methane emissions. Reference link:

Trillium Asset Management said: “We believe Spectra Energy’s social license to operate is at risk and the company has a responsibility to implement a program of measurement, mitigation, and disclosure.”

If that weren’t enough evidence of ongoing problems with Spectra Energy operations — as recently as December, the Pipeline Hazardous Materials Safety Administration (PHMSA), issued Spectra Energy CEO Greg Ebel a “Final Order” and civil penalty of $134,500 related to various violations across several states. Included in this Order, the company was cited for failure regarding valve inspections.

And from that Final Order to Spectra Energy CEO Greg Ebel:

The Notice alleged that Respondent violated 49 C.F.R. §19 2.605(a) by failing to follow its own written procedures….

Well, Spectra hasn’t promised Dougherty or Lowndes County to follow its own procedures!

Hm, but Andrea Grover did promise, according to the VDT:

…the pipe will be monitored 24/7. The monitoring system will be fitted with sensors which would detect leaks. The pipeline will have shut-off valves that will be shut off remotely in the event of a leak.

Back to that Final Order:

Item 5: The Notice alleged that Respondent violated 49 C.F.R. §192.605(a), as quoted above, by failing to follow its own written procedures implementing the substantive requirements of 49 C.F.R. § 192.745(a).4 Specifically, the Notice alleged that Texas Eastern failed to follow its own SOP 5-5010, Valve Inspection and Maintenance, which required annual valve inspections, but at least at intervals not exceeding 15 months, for valves that might be required during an emergency. Under the company’s procedure, such inspections had to include the full or partial operation of each valve.5 The Notice alleged that between 2008 and 2011, multiple valves at Texas Eastern’s facilities in Texas, Louisiana, and Arkansas had not been partially operated as part of the annual inspections.

Respondent did not contest this allegation of violation, but stated in its Response that the violation resulted from the use of a single database used to document the maintenance of all valves, both emergency and non-emergency. While SOP 5-5010 required partial operation only for valves that might be required during an emergency, the Texas Eastern database failed to separately identify non-emergency valves that did not require partial operation during inspections.

Why should we believe recently-fined Spectra Energy will monitor its pipeline?

How about we call off the pipeline and install solar panels instead, for local jobs and energy for Georgians and no risk to our drinking water, wildlife, or people.

When will the Lowndes County Commission help us fend off this pipeline boondoggle?