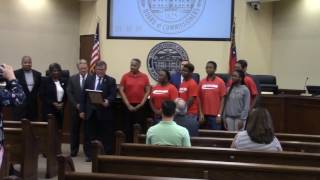 The Lowndes County Commission did not meet this week (no reason given: the meetings merely marked Canceled on the county’s online calendar), but it did two weeks ago.

On April 11, 2017 we discovered the T-SPLOST meeting would be at the regular SGRC location in Pearson, 1PM Monday April 17, 2017. Michelle Williams of Hahira noted a phenomenon of people not checking for ownership of lost and found pets. The week of 10 April 2017 was Telecommunications Week and the Chairman thanked 911 Center personnel.

The GDOT Mowing Contract includes all the exits in Lowndes County. They unanimously approved that and everything else, The longest item at almost eight minutes was the Tuscan Palms subvision asking to be forgiven paving money the county gave it that never was used.