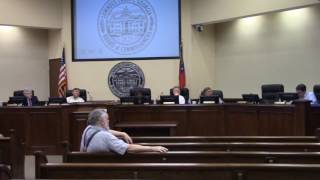 They vote 5:30 PM Tuesday about what they discussed this morning. The longest item at five minutes was 6a. FY2018 Juvenile Justice Incentive Grant Program REquest. Third longest was a subvision asking to be forgiven paving money the county gave it that never was used. And second longest, although not on the agenda, was a T-SPLOST report by the County Manager.

Below are links to each LAKE video, with a few notes, followed by a LAKE video playlist. See also the agenda.