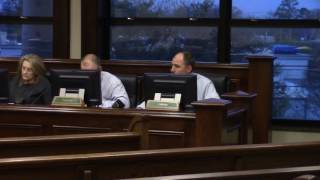 Maybe more will show up at 5:30PM today for the Regular Session than the Chairman and only two Commissioners at yesterday’s Work Session (Joyce Evans and Mark Wisenbaker).

Chairman Bill Slaughter revealed why he had been missing from the meetings two weeks before: he had been attending an America’s Defense Community event in in San Antonio, Texas about Moody AFB. Follow the link for more about this. He complimented Vice-Chair Joyce Evans for running the meeting better than usual in his absence. She did beat his former record of five minutes by holding a three-minute Work Session.

The returning REZ-2017-02 Calles rezoning now wants to split half conservation and half R-A. Apparently the other rezoning, REZ-2017-03 Val North Dr, Stewart Circle, PD Amendment and Conditions Removal, Water & Sewer, ~9 acres had been heard before and was now being reconsidered because a road had been paved. Remember that when they try to claim roads don’t drive development.

Below are links to each LAKE video of the 13 March 2017 Work Session of the Lowndes County Commission, with a few notes, followed by a video playlist. See also the agenda, and the LAKE videos of the 27 February 2017 Greater Planning Commission meeting.