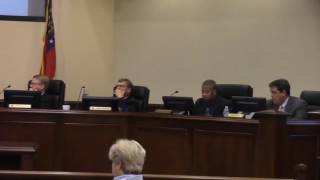 Tuesday Chairman Bill Slaughter did say there will be a retreat Thursday and Friday this week, but he didn’t say where or what time of day. Yesterday afternoon they finally put on their website that it starts 8AM this morning at Quail Branch Lodge. Here’s hoping Commissioner Joyce Evans is well enough to attend.

In a refreshing change of procedure, they nominated all three candidates for two VLMPO vacancies, and selected the top two vote-getters: Phil Hubbard and Clay Milligan. However, only after they voted did they ask the candidates to speak. They clearly had never met Hubbard, since they didn’t know who he was, and the Chairman and the agenda got Clay Milligan’s name wrong.

Surprisingly, they did not approve 7c. Request for Relief for Tuscany Palms Utility Tax District. The developer wants $447,224.44 forgiven. That’s a lot of money, more than ever forgiven before. They tabled it so the County Attorney could research it more.

They tabled rezoning REZ-2017-01 Cone/Malone until April at the request of all parties, and they tabled REZ-2017-02 Calles until March for more information after once again the longest discussion in the meeting. The Airport Authority wants further input, due to proximity, and the many agencies who have examined the site have not yet provided reports to the county. County Planner Jason Davenport said the Planning Commission had not really heard this case, only 10 minutes from the public, right after County Chairman Bill Slaughter only allowed 10 minutes from the public in this County Commission meeting.

REZ-2017-02 Calles is also a water item, because of the wetlands, and a neighbor’s claim that wells were being polluted. Other water issues included the emergency custom switch for the Bevel Creek lift station single-sourced from Cowart Electric for $18,850, the engineering and permitting for the Jumping Gulley Bridge for which they approved $19,750, the Valencia Street Drainage Improvements, which they tabled for more analysis to determine which option to pursue, and Stacey Young’s CWTBH request from Roger Budd Company not to have to pay $300,000 to drill under Bemiss Road to connect to county water and sewer for an existing development.