Josh Thomason wants to combine three parcels and annex one of them into Hahira. 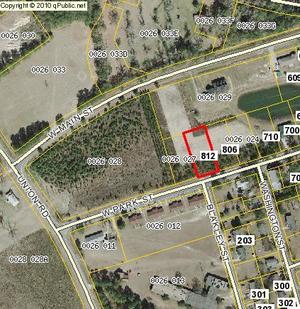 Some people are rightly concerned about whether Hahira’s sewer system can handle it. Apparently Hahira Mayor and Council have already discussed these three related cases, and they come up for two Planning Commission meetings and a Hahira vote in the next few weeks, plus the annexation goes past the Lowndes County Commission. Oh, and Valdosta is indirectly involved.

If no one objects you can be certain the Planning Commission will recommend approval & the City Council has already said they intend to vote up or down on it at the Council Meeting at 7:30 Thursday, June 2nd. The Council already discussed it at the May 2nd Work Session and do not intend to discuss it again until they vote on June 2nd because the June Work Session is the same night as the Planning Commission Meeting on May 31st. It will have to be advertised as a public hearing on June 2nd at which time citizens can voice their opinions, but if you miss the advertisement it’s a done deal. 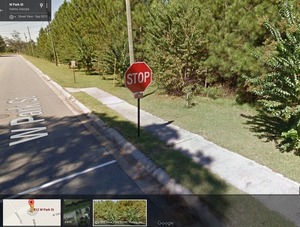 If you drive by the property you will also note for sale signs on neighboring properties. Once this property is rezoned and annexed those properties will be next because annexed land that joins other properties invites annexation by extension. We don’t feel like adequate concern is being shown for making sure all citizens are included in planning for our community’s future growth & development. Civic duty does not end at the voting machine. If it’s a good thing, then by all means make certain everyone is fully informed and decisions are not made in haste.

If this follows the pattern of previous annexations, Hahira has probably already sent a letter to Lowndes County, and at the Lowndes County Commission Work Session 8:30 AM Monday May 23rd, County Manager Joe Pritchard will say he got it and the county must respond. The county meetings are at 327 N. Ashley Street 2nd Floor, Valdosta, GA 31601. You can’t speak at a County Work Session (unless you somehow manage to get on the agenda), but you can catch County Commissioners before or after to talk to them.

Later that same day, 5:30 PM Monday May 23rd, the Greater Lowndes Planning Commission (GLPC) will discuss these cases at its Work Session at South Health District Administrative Office (former Lowndes County Administration Building), 325 W Savannah Ave, Valdosta, GA 31601. You don’t get to speak, usually, although sometimes they will call on somebody in the audience who appears to have concerns. And you can speak to Planning Commissioners before or after the meeting.

According to Barbara, the Hahira Mayor and Council will have a Work Session that same evening, Monday May 23rd, presumably at the usual time of 7:30PM. If that meeting is listed somewhere on Hahira’s website, I can’t find it. Speaking of websites, only Valdosta’s website lists the upcoming GLPC meetings (not those of Hahira nor Lowndes County).

At the County Commission Regular Session 5:30PM Tuesday May 24th, Lowndes County Commissioners will either agree to write back to Hahira saying the county acknowledges the letter, or they can write back with objections. Given that the county government knows little of Hahira, probably the former. Although this annexation is counter to the county’s plan to encircle Hahira with developments on county water and sewer, so one never knows. This will not be a public hearing, so you only get to speak in Citizens Wishing to Be Heard at the end of the meeting, after they vote, and they never answer those in public. But you can catch the County Commissioners before or after the meeting.

GLPC will hold a public hearing (at which citizens can speak for or against) and vote on recommendations at its and Regular Session Tuesday 5:30 PM 31 May 2016. GLPC merely recommends. Hahira can vote however it likes, regardless of those recommendations. However, GLPC usually has the best discussions of any rezoning cases, as in they actually express and debate opinions, and respond to citizens.

According to Barbara, the Hahira Mayor and Council will have a Work Session that same evening, Tuesday May 31st, presumably at the usual time of 7:30PM. If that meeting is listed somewhere on Hahira’s website, I can’t find it. Speaking of websites, only Valdosta’s website lists the upcoming GLPC meetings (not those of Hahira nor Lowndes County). 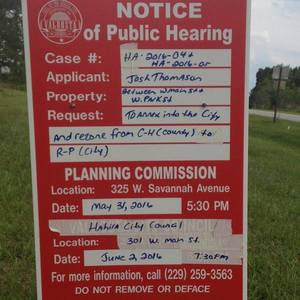 Finally, Hahira Mayor and Council will hold a public hearing (at which citizens can speak for and against), and vote on these cases 7:30 PM Thursday June 2nd, at the Hahira Courthouse, 301 West Main Street, Hahira, GA. Although of course Hahira could decide to table it, in which case repeat most of the above a month later.

What does Valdosta have to do with this? According to Hahira’s website, Greater Lowndes Planning Commission,

And you’ll notice that’s the same telephone number at the bottom of this Public Notice in the VDT 15 May 2016: PUBLIC NOTICE TO THE CITIZENS OF THE CITY OF HAHIRA,

Notice is hereby given that the Greater Lowndes Planning Commission (GLPC) and the Hahira Mayor-Council will hold public hearings to consider the following Variance, Rezoning and Annexation requests. The public hearings are as follows:

FILE NUMBER HA-2016-02. Request by Cheryl Godfrey for a variance from Section 6-1 of the Hahira Zoning Ordinance pertaining to front and rear yard setback requirements. The subject property is located at 803 W. Park Street in Hahira, Georgia. (all or part of Tax Map 0026 Parcel 020)

FILE NUMBER HA-2016-04. Request by Josh Thomason to rezone 4.90 acres from Highway-Commercial (C-H, county) Residential Professional (R-P, city). The subject property is located along the east side of Union Road, between W Main Street and W Park Street, in Hahira,

FILE NUMBER HA-2016-05. Request by Josh Thomason to annex 4.90 acres from Lowndes County into the City of Hahira. The subject property is located along the east side of Union Road, between W Main Street and W Park Street, in Hahira, Georgia (all or part of Tax Map 0026 Parcel 028).

Any comments may be presented at the public hearings, or filed in writing prior to the public hearings. Also, review of the above application requests is available in the Planning and Zoning office located at 300 North Lee Street, Valdosta, GA.

AS SET FORTH IN THE AMERICANS WITH DISABILITIES ACT OF 1992, THE CITY OF VALDOSTA DOES NOT DISCRIMINATE ON THE BASIS OF DISABILITY AND WILL ASSIST CITIZENS WITH SPECIAL NEEDS GIVEN PROPER NOTICE (SEVEN WORKING DAYS). FOR MORE INFORMATION, PLEASE CALL