Which do you want? A 31 megawatt solar farm such as is building next to Albany, Georgia, built by Southern Company subsidiary Georgia Power to power 5,000 homes, and that won’t leak or explode? Or the Sabal Trail fracked methane pipeline that could blow up like

another Spectra Energy 36″ pipeline this morning in Pennsylvania, badly burning a man and incinerating his house? After which Spectra declared force majeure, which Bloomberg spells out as “Force majeure is declared to remove a company from contractual obligation because of events beyond its control.” So apparently any promises Spectra or Sabal Trail made to you, your city, county, or state, it can just declare force majeure and get off the hook. Even for a 40-mile-long and 4,000-foot-high plume of smoke.

Albany, a southwest Georgia city of about 80,000, is in a state of transition these days — from old power to new power.

Thursday, Georgia Power broke ground on a solar power farm near Albany that will deliver 31 megawatts of power — enough to supply roughly 5,000 homes, at least when the sun is shining.

Meanwhile, the Atlanta utility shut down part of a 52-year-old coal- and oil-fired plant near Albany last year, and plans to shut down the rest of it if state regulators approve its decommissioning.

Albany’s old and new power generators are just the latest example of the turnover that has been occurring at utility companies across the nation.

Marie Cusick and Susan Phillips, StateImpact, 10:32 AM 29 April 2016 Man injured after pipeline explodes near his home in western Pa.,

A man has been taken to the hospital with serious burns after a 30-inch interstate natural gas transmission pipeline exploded next to his home in Westmoreland County. About a dozen homes have been evacuated and a quarter mile evacuation zone remains in place. Video from the scene shows a raging fire lighting up the early morning sky. First responders on the scene say the man did not come in direct contact with the flames, but it was the intense heat that scorched him and his home.

The explosion happened at around 8:30 am Friday morning, about 200 yards behind a home in Salem Township, which lies 30 miles east of Pittsburgh. It destroyed that home, torched a field and damaged several homes near by.

Richard Johnston was in his house a quarter mile away.

“It was just fire…everywhere you looked,” he said. “Debris on fire blowing across the yard here.”

Fire officials say the injured man’s home was completely destroyed by the flames. His name has not been released and his condition is unknown at this point. He was taken to UPMC Mercy Hospital in Pittsburgh.

“It looks like a bomb went off. As far across my windshield as I could see was just a massive fireball,” Forbes Road Fire Chief Bob Rosatti told reporters at a news conference.

“While the fire was contained and gas was shut off—residual gas in the pipeline is continuing to burn,” says John Poister, a spokesman for the state Department of Environmental Protection. “A quarter mile evacuation zone is being maintained until further notice.”

That story says Spectra has “activated its emergency response plan”. A little late, eh? And as usual “Pipeline safety experts say it could be weeks before the cause is known.” Or months, or years, or never, unless it happened to be next to a federal highway, when the National Transportation Safety Board will do a real report, like it did for several of Spectra’s three-decade rap sheet of leaks, explosions, property damage, and fatalities.

That story also has this:

The section of pipe that exploded was built in 1981. Spectra says “an inline inspection in 2012 revealed no areas requiring repair or remediation before the next inspection.”

The company did not say when the next inspection was scheduled.

Spectra last inspected that pipeline four years ago. So much for 24/7 monitoring and speedy corrosion detection.

While repairs will start as soon as possible, it’s unclear when service will be restored, Spectra said in a notice. The company declared force majeure at midday, sending natural gas futures surging as much as 5.6 percent on the New York Mercantile Exchange on speculation that the outage will limit supplies to the Northeast.

Catch that, buried in the middle of that paragraph?

That means Act of God, not our fault. Even though they also claim they don’t know what caused it.

But if it’s force majeure, they’re probably off the hook for damages.

The Bloomberg story gets around to spelling out part of the implication at the very end of the article:

The DEP is investigating any effect on nearby gas wells and any environmental damage, Poister said.

Force majeure is declared to remove a company from contractual obligation because of events beyond its control.

Plus this explosion according to Bloomberg could interrupt natural gas delivery to much of the U.S. east coast for some undetermined amount of time. If somebody damages a solar panel or a solar farm, that’s all that’s damaged.

“It looked like you were looking down into hell. As far across my windshield as I could see was just a massive fireball,” said Forbes Road Fire Chief Bob Rosatti, describing his arrival at the blast scene near Route 22 and Route 819….

Rosatti said the explosion and fire “damaged all the trees, all the utilities going down the roadway — the phone, cable, electric. Burned all the telephone poles off. It kind of looks like a bomb went off.”

WTAE posted several videos, including the one from which I took these two stills: 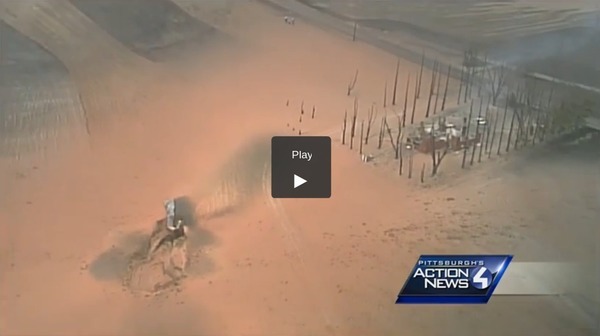 “A natural gas explosion and a fire scorched a large swath of land and left a house in ruins Friday near Route 22 and Route 819 in Salem Township, Westmoreland County.” 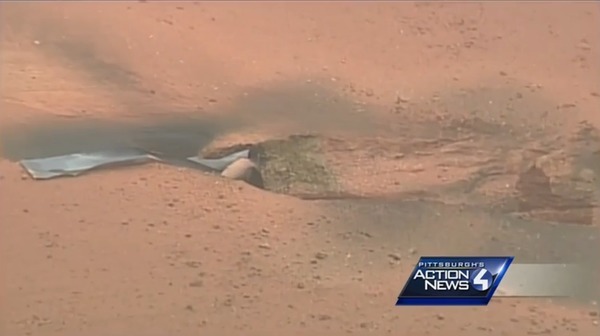 Crater with pipe and flames. 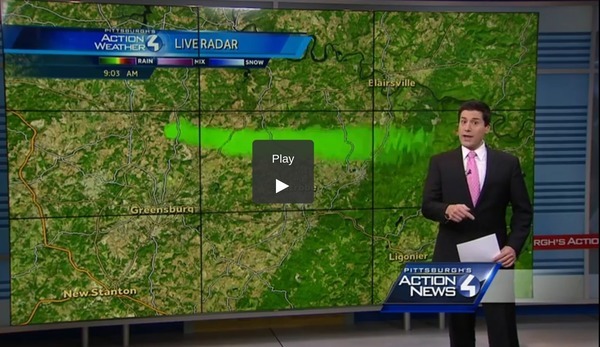 One of WTAE’s videos has this oxymoron title:

Pipeline Fire Declared Under Control; Flames to Burn Out

Which do you want? Or profit for a company from Houston, Texas risking our homes, families, land, air, and water?

1 thought on “Solar farm or fracked methane pipeline with explosions?”