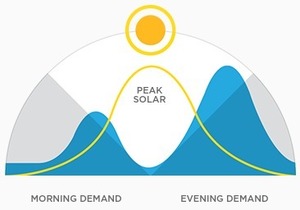 Power generation for both traditional electricity uses and transportation is changing.

The batteries are likely to become more useful if, as expected, more utilities and regulators allow power prices to change throughout the day based on market conditions. That way, the software that controls the solar and battery system will allow customers to use their home-generated power—and not expensive grid power—when grid prices spike.

Many commercial customers already buy power this way, and Tesla also announced battery systems designed for them, along with bigger battery packs that utilities can use to manage their grids. Analysts say these utility and commercial markets will probably be more promising for Tesla during the next few years than residential customers.

And what about Southern Company, whose CEO, Tom Fanning, drives a Tesla? Maybe we’ll find out at the SO stockholder meeting 27 May 2015.

According to Tesla’s Powerwall web page,
10 kWh $3,500
7 kWh $3,000
“Ten year warranty with an optional ten year extension.”
And multiple batteries can be installed at same location.

Powerwall is a home battery that charges using electricity generated from solar panels, or when utility rates are low, and powers your home in the evening. It also fortifies your home against power outages by providing a backup electricity supply. Automated, compact and simple to install, Powerwall offers independence from the utility grid and the security of an emergency backup.

Notice the wording here: “independence from the utility grid”, which is very different from how so many stories are spinning this; it’s not “off the grid”. I already have batteries for my first 3KW solar panels, and many a time they’ve kept lights, refrigerator, Internet connection, and computers humming along when the grid has been out. But I still like to sell power to the grid. That not only reduces my power bill, it helps reduce further fossil fuel expansion, and if enough people do it, that will take more coal plants offline. As SolarCity CTO Peter Rive previously remarked, “the grid is a network, and where there are networks, there are network effects.” Adding batteries increases the network effects of reducing total needed fossil fuel power production, and making the whole grid more resilient by distributing energy production.

The most significant thing about Tesla’s home battery announcement is that it opens a market for all the other contenders: capacitors, and compressed air underground storage, and Robert Green’s pumping water uphill, and Harvard’s organic flow battery, and Stanford’s aluminum battery, and probably still others not announced yet.

It only took a decade or two for much of the shift from horse-drawn carriages to internal-combustion automobiles. The shift from fossil fuels to sun, wind, and water-generated power can be even faster, and it’s already started.