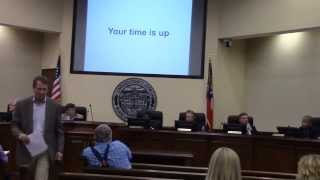 A local citizen got cut off just as he said the county attorney’s opinion was he could interpret state law about property taxes however he wished, in the 24 March 2015 Regular Session of the Lowndes County Commission.

9. Citizens Wishing to be Heard-Please State Your Name and Address

Video. Craig Cardella’s concern was that the County Commission does not have enough money to do things that are important to the community. He said he had given a similar talk to Valdosta Mayor and Council recently. He said he had been a city manager in the past, and had worked in and around local government nearly all his career.

In 2009 GA State Senate authorized Property Tax Assessment and Appeal Committee (PTAA). Committee concluded during hearings over summer of 2009 that current appeals laws are neither transparent or fair, and not taxpayer friendly. Result was SB 346: Ad Valorem Taxes; revise comprehensive provisions. However, he said little has changed, and only about 10% of appeals in Lowndes County have outcomes favorable to the appealing taxpayers. Also the Board of Equalization (BoE), which he was recently appointed to, often don’t know the details of cases. Plus BoE attends same training as Tax Assessors, which leads to confusion of roles and lessened independence.

So the question came: who’s really judging the assesment disputes?

Law requires consideration of income, but he said that gets ignored with a wink and a nod, with GA Dept. of Revenue and local assessors calling the law “intrusion”. Longstanding concern of assessors cherry-picking comparables to defeat an appeal. HB 954: Ad valorem tax; property; change definition of fair market value was passed last year with intent to require tax assessors to obey SB 346.

As with Senate Bill 346, tax assessors in Lowndes County ignored the new law Mr. Elliott claims the county is not required to value property, except as he thinks the intent of the law requires. except

At this point the Chairman cut him off due to the five minute limit. Cardella said he wasn’t aware of that limit, and asked for more time. Chairman denied that request. He did get to leave copies with the Clerk.

We’ve seen Craig Cardella before, back in 2011, speaking against the CUEE-proposed school system “unification”.

Craig Cardella is not on Lowndes County’s list of BoE members, which probably means that list is out of date. Remember last November the Clerk of Court and the D.A.’s office were looking for volunteers to be appointed to the BoE by the Grand Jury. Apparently Cardella volunteered.

We don’t know what point he was leading up to two weeks ago, but I wonder if the county set the millage a couple points higher so they’d have enough money, maybe that wouldn’t require so many dubious appeals processes.