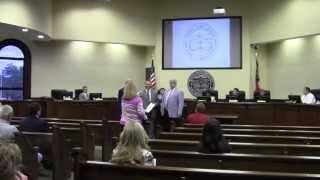 Congratulations to Ashley Tye for being only the third in the state to attain a certificate as a professional emergency manager.

“I was trying to break a record,” bragged County Chairman Bill Slaughter as several people reminded him not to skip approving the minutes, presumably referring to the previous morning’s three-minute Work Session. After the six-minute presentation, they took less than a minute on each of the remaining items, except they did find time for an Executive Session for Attorney-Client Privilege. Who are they suing this time? Crawford Powell had to remind the Chairman not to skip Citizens Wishing to Be Heard, but “There are none,” said the Chairman, with satisfaction.

This time the contractor had magically finished punchlist for Nottinghill that the previous morning the County Engineer said would take a week, but had not finished the work. What does this rubberstamp punchlist mean, then? They approved the Davidson Road drainage easement quit claim from the county back to the landowner.

Here’s the agenda with links into the videos and a few notes, followed by a video playlist.