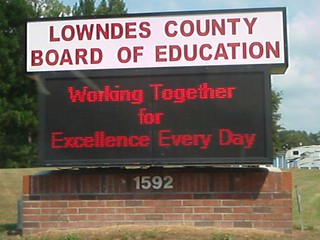 Not two, but three public hearings on the LCBOE higher millage rate, 10 AM and 6 PM on July 15, 6 PM on July 22. That rate still puts Lowndes in the middle of school millage for counties statewide. And they published a budget summary before the hearings.

Lowndes County Board of Education unanimously approved a budget Thursday that includes the school system’s first tax increase in a decade.

As for the tax increase, the board tentatively approved upping the millage rate by 2.2123. This will bring the total millage levied to 16.848.

As per procedure, the board did not vote to approve the millage rate. The board will present the millage rates to the public by hosting three public hearings, two on July 15 at 10 a.m. and 6 p.m., and one on July 22 at 6 p.m. These hearings will allow the public to ask questions regarding the millage increase.

Following the July 22 meeting, there will be a called meeting at 6:30 p.m. to adopt the millage rate increase.

The Lowndes County Board of Education approved a $75,632,633 balanced general fund budget for the 2014-2015 fiscal year during its June 26 called board meeting. This is the first balanced budget, without depending on reserves, for Lowndes County Schools since 2009. Decreases in state funding have included a loss to Lowndes County Schools of $54,655,000 in austerity cuts over the last twelve years and a decrease of $2.9 million in equalization funding since 2007.

The new budget includes an increase in millage rate of 2.2123 and a decrease of 2 furlough days for teachers and students. The increase in millage brings the total millage levied to 16.848, aligning Lowndes County with other school systems in the RESA district. Also included in the budget is a decrease in personnel expenses of over $1 million, achieved through attrition.

The budget process began in mid February and has been a team effort, involving staff at school and system levels with the needs of students a top priority. During the budget development, cuts were taken in areas that did not have direct impact on the instructional programs.

Detailed information and the approved budget will be available under the Finance and Human Resources tab on the system website.

According to the Georgia Department of Revenue’s Tax Digest Millage Rates, that new rate of 16.848 puts Lowndes at #91 of 158 counties listed (one is missing), or barely above the median of 16.298. Here’s how Lowndes compares to surrounding Georgia counties:

Lowndes is higher than some, but lower than Lanier County and Valdosta, and quite a bit lower than Bibb and Dougherty County schools. So much for consolidated school districts being less expensive.