The war on drugs causes violence, poverty, and illiteracy in Latin America that drives illegal immigration into the U.S., for the profit of Monsanto, military contractors, and private prison companies. Does that seem right to you?

The war on drugs in Mexico, partially funded by hundreds of millions of dollars in U.S. government assistance, has not only failed to curb the trade but intensified horrific violence, corruption and human rights abuses, writes Neal Peirce.

For most Americans, the recent news of popular demonstrations in Mexico was probably a small diversion from the daily tide of bloody global reports from such faraway hot spots as Pakistan, Syria, Libya, Afghanistan and Bahrain. 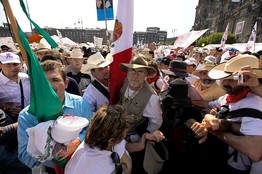 Why worry, most of us likely concluded, if thousands of Mexicans are marching in the streets, protesting the horrific violence and high death toll in their nation’s raging drug war? Isn’t that their problem?

It’s true, the news reports focus less on the American role, more on growing anger with the government of President Felipe Calderón and the meager returns from the massive police and military crackdown on the drug trade he inaugurated in 2006.

Since then, more than 37,000 Mexicans have been murdered, often tortured and brutalized before their deaths, as cartels battle for control of drug smuggling routes and brazenly assassinate anyone, official or average citizen, they think is in their way.

The hard lesson is that the war on drug dealers, decreed by Calderón and partially funded by hundreds of millions of dollars in U.S. government assistance, has not only failed to curb the trade but intensified horrific violence, corruption and human-rights abuses.

So what can be done?

The Mexican poet Javier Sicilia, who stopped his writing after his 24-year-old son was gunned down by drug terrorists earlier this year, catalyzed the May marches. He articulated a Martin Luther King-like answer to the violence convulsing his country:

“We will not turn this pain in our souls, in our bodies, in hate nor in more violence, but in a vehicle to help us restore love, peace, justice and dignity and the stuttering democracy that we’re losing.”

And the U.S. proposed solutions to the sources of these toxic substances?

“wasteful and harmful supply-side programs such as aerial fumigation and military aid.”

A group of 20-plus U.S. experts and advocates in drug policy and Latin American affairs has weighed in on Sicilia’s side, calling on the U.S. to drop “failed prohibitionist drug policies” on our home turf “so that violence, corruption, assassinations and the degradation of Mexico’s fragile democratic institutions” can be curbed.

That group calls for stopping the spraying and shooting. Maybe we should do that so the U.S. can preserve what’s left of its own fragile democratic institutions.

Further, that group agrees with LEAP and Judge Napolitano:

On its home turf, it was suggested, the U.S. should take a “first step” by legally taxing and regulating marijuana — noting that marijuana is reportedly the leading source of profit for Mexico’s traffickers.

It’s either that, or this:

A sad reality — underscored by a recent report in The Economist — is that the drug-running and drug wars between cartels are now infecting virtually all of Central America. The route to the U.S. used to be from Colombia, the world’s top cocaine producer, across the Caribbean to the tip of Florida. But the U.S. Coast Guard shut that route down by the early 1990s, so that shipments began to flow directly north, through Mexico, into the United States.

Somewhere between 250 and 350 tons of cocaine, the Economist reports, now pass through Guatemala on their way to the U.S. Mexico’s Sinaloa, Gulf and Zetas mobs operate through much of the Central American isthmus and — unlike the Colombians — pay their help in drugs, not cash.

The results have been devastating. Guatemala, Honduras and El Salvador all have murder rates more than double that of Mexico, and Nicaragua’s has spiked in recent years as well. All are among the world’s poorest nations. Guatemala, for example, is plagued by malnutrition rates of up to 80 percent in some rural villages. The country’s average schooling rate is just 4.1 years.

And that violence, malnutrition, and illiteracy means high birth rates and more people trying to get into the U.S. to find jobs. The war on drugs is the biggest driver of illegal immigration into the United States. Meanwhile stateside we (in Georgia and other states) continue to lock up more of our own people, and pass anti-immigrant laws that will lock up more refugees from the Latin American military battlegrounds of the drug war.

And now we’re turning those prisons into private prisons for the profit of private prison executives and investors at the expense of we the taxpayers. Private prisons that compete with domestic labor and industry. That’s

regulatory capture by the war on drugs on a massive scale. Right here in the U.S.

Continue pervasive destablisation of governments throughout the region, including our own, or legalize drugs. It is time to legalize drugs, regulate them, and tax them.

We don’t need a private prison in Lowndes County so private prison executives and investors can profit from the war on drugs. Spend those tax dollars on education instead.