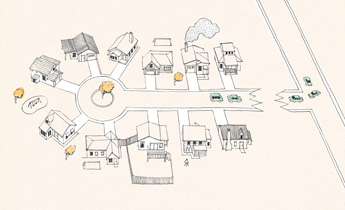 Eric M. Weiss writes in the Washington Post on 22 March 2009 about In Va., Vision of Suburbia at a Crossroads: Targeting Cul-de-Sacs, Rules Now Require Through Streets in New Subdivisions

The state has decided that all new subdivisions must have through streets linking them with neighboring subdivisions, schools and shopping areas. State officials say the new regulations will improve safety and accessibility and save money: No more single entrances and exits onto clogged secondary roads. Quicker responses by emergency vehicles. Lower road maintenance costs for governments.

Banning cul-de-sacs was one of the New York Times Magazine’s 9th Annual Year in Ideas, because it’s safer and less expensive: END_OF_DOCUMENT_TOKEN_TO_BE_REPLACED