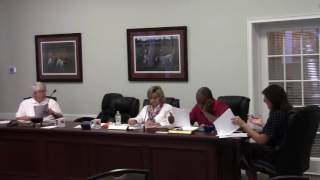 The Development Authority is twice as under budget as it is under revenue, and they expect tax collections to catch up in January. National Manufacturing Day had great local and national media coverage. Fussell Tire wants to build a warehouse with a non-coforming face towards St. Augustine Road; the board sent back a look askance. They’re also still feuding with the Post Office about mail delivery to Nature Nate, the only tenant in Miller Business Park.

They lacked a quorum with just Teri Lupo and Roy Copeland until Jerry Jennett arrived, when they went back and voted on minutes and financials. The meeting next morning, despite what the VDT public notice said, was for the South Regional Joint Development Authority; LAKE video of that to come.

Not in the same order as the agenda, but in the order the items were actually covered, below are LAKE videos of the meeting with a few notes, followed by a video playlist.