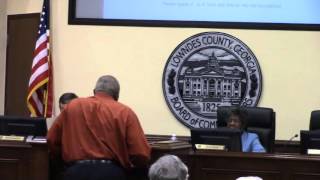 Video. About the public hearing for rezoning from Estate Agricultural (E-A) to heavy-duty manufacturing (M-2) for the hush-hush Project Max, the big-fish container manufacturing plant proposed for Rocky Ford Road, next to the protected watershed of Mud Swamp and near Valdosta Airport, see separate post for what little the public (or the Planning Commission) is allowed to know.

Citizen Mike Paine said he owned a little over 20 acres in one tract about a mile and a half from the proposed rezoning; presumably that’s Parcel 0060 002 farther south on Rocky Ford Road, also on the east side of the road backing up against Mud Swamp, like the subject property. He said he was opposed to the rezoning for two reasons:

The previous Tuesday’s meeting was the Special Called meeting of the Greater Lowndes Planning Commission (GLPC), at which Commissioner Ted Raker said it would be a whole lot easier to make these kinds of decisions if the Planning Commission wasn’t being asked to just “trust us”. He said even if the Commissioners had to sign confidentiality agreements, the whole process would run a lot smoother.

Speaking for the rezoning at the Lowndes County Commission Regular Session was Andrea Schruijer, Executive Director of the Development Authority, who basically repeated the same things she said at the previous Tuesday’s GLPC Special Called Meeting, and County Planner Jason Davenport repeated at the Monday morning Lowndes County Commission Work Session, that it was a rush request to try to land a container company. She didn’t really explain why that business’s demands (I-75, rail, natural gas for boilers, yet clean air) outweighed local landowners’ need to know. She claimed again many jobs paying more than average and no particulate emissions.

Commissioner Demarcus Marshall thanked her, since citizens are always asking where are the jobs, and it’s the Development Authority’s job to find them, but he wanted to know whether no conditions would help them do their job. She said she supports both conditions.

The conditions are in the agenda item from the Work Session, but the Chairman clarified that Commissioners also had another version that had been reworded by the county attorney.

Commissioner Mark Wisenbaker wanted to know, following up on Mr. Paine’s questions, about emissions and traffic. Schruijer said the only emissions would be steam, with no particulate matter. She didn’t mention that if they’re burning methane, that produces carbon dioxide. She said the traffic would be 200 employees coming in and out of work, plus some trucks inbound for raw materials, with the resulting product going out by rail.

Commissioner Marshall wanted confirmation that the Development Authority would be purchasing the property first. She said yes.

Also speaking for was Jeff Lovell, Development Authority Engineer, who also said pretty much what he said in the GLPC meeting, plus “natural gas is one of the cleanest fuels that you can burn” and they would adopt federal standards. I should hope so, those being the law and all. However, natural gas still He said the company liked seeing solar power around about. Also they would not use much water beyond

Jerome Tucker, 593 Jumping Gulley Road, said he had spent a good part of his life out there working at Griffin Corporation, and had seen up to 700 people on that access road. He said the road infrastructure was much improved now from back then 30 years ago, so he didn’t see traffic as a problem. And for manufacturing, he sees this company as clean as any could be, “and again, 200 jobs”. Sounds like he knows something about the prospective company, which is conceivable because he’s a former Industrial Authority Chair, and he’s been to almost every one of their meetings in recent months.

Tom Call, 1108 Gornto Road, Chairman of the Development Authority, once again (like at the GLPC meeting) claimed to represent all citizens of Lowndes County, and spoke for the project. He said in response to Mr. Paine’s comments that he, Tom Call, had verified that this prospect would be “a tremendous asset to our community” in jobs and “corporate synergy”. Translation: it could help attract more businesses. It’s worth remembering Tom Call was not exactly vocal against the private prison. So let’s hope this time he really has verified.

Commissioner Wisenbaker wanted to know timeline for groundbreaking. Call said the prospect needs to be open and operational 1 October 2017.

It’s also worth remembering the Development Authority still goes to a lot of trouble to groom business parks, including paying most of their 1 mil of property taxes to service the bond debt for those parks. Yet his biggest fish they’ve had on the line for a long time didn’t find any of those business parks acceptable. Maybe they should change their strategy. Hm, how about put solar panels on those parks, or sell off some of them and use the proceeds to fund solar panels elsewhere in town.

Commissioner Clay Griner made a motion for approval of the rezoning with only one condition; the one about use restricted to just the stated purpose of the company. Commissioner Marshall seconded, and they voted for it.

So it passed with the one condition, which was basically condition 1. They did not pass condition 2, which would have made the rezoning effective upon transfer of the property to the Development Authority. So now that land is zoned M-2 regardless of who owns it.