How can we “Know the Laws” as the county’s front page says, if a county ordinance being revised isn’t there and isn’t distributed when the county is about to vote on it Tuesday evening after the Work Session this morning at 8:30 AM?

For the Nuisance Abatement Ordinance the packet agenda sheet says only:

HISTORY, FACTS AND ISSUES: Lowndes County’s Nuisance Abatement Ordinance has not been updates since 1992. Due to changes in state law, a new ordinance has been drafted and is ready for consideration. 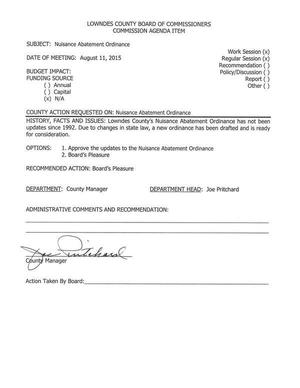 What 1992 ordinance? Which state law? Where’s the new draft?

An ordinance is a local law or regulation enacted by a city or county government. Listed below are county ordinances that are most requested by the citizens. If you do not see the ordinance you are looking for please call Paige Dukes, Lowndes County Clerk.

Yeah, Gretchen tried that, more than five years ago, saying at the time:

Paige says she has been diligently working on this and I absolutely positively believe her. And I know it’s very complicated But I really encourage y’all as a body — I’m not trying to tell you how to do your job — but to keep the business of our county in order. Thank you.

It must be really very difficult and complicated, because even after more than four years of diligent work, still we don’t see a complete list of ordinances on the county’s website, and we do see the county passing updates to an ordinance without the affected public being able to see either the old or the new versions.

The county did find time to pass an illegal bill of attainder against those asking, and to make that even more obvious by not enforcing it against others less than a month later.

One could begin to wonder, what is the Lowndes County government hiding? 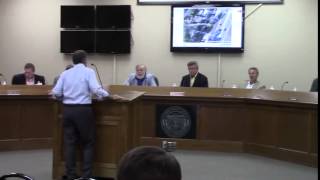 Here’s the agenda for this morning and tomorrow evening. 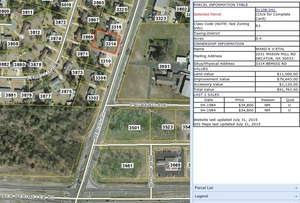 See also the LAKE video of the rezoning when the Planning Commission considered it and recommended approval. Curiously, the GLPC agenda item said it was for Ron Borders, and the County Commission item says REZ-2015-14 K. V. Ward. Why the difference?

And while the agenda has several emergency management items, still nothing but crickets about the Sabal Trail pipeline. Quite a difference between Lowndes County’s silence and Hamilton County Florida declaring an emergency and spending 18 minutes interacting with a citizen on the topic. Even more contrast with Dougherty County and Albany passing multiple resolutions and jointly asking Governor Deal to oppose the pipeline.