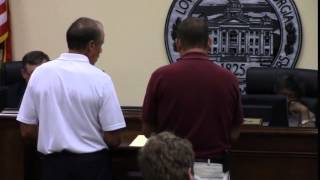 Not on the agenda, discussed for fifteen minutes, then suddenly approved: more funding for the Airport Authority, at the 14 July 2015 Regular Session of the Lowndes County Commission. Which was similar to the previous morning’s transportation study discussion, except the Commission didn’t vote that time on any possibility of funding that one.

TSA has reduced the amount of money it gives to small airports like Valdosta and in order to have an officer with arrest authority, the county and city of Valdosta must work together to fund the positions (17 hours daily that airport is open). The Lowndes County Commission did not include this expenditure in the budget approved last month because they wanted more information and Airport Executive Director Jim Galloway came to explain the need.

After the security request, there was a request for additional funding for fire protection.

Both requests were approved by the commission.

This was not a scheduled agenda item and was presented during the County Manager’s report.

Which is very interesting considering the Chairman’s last word the previous morning about the public transit and trucking study funding request was:

…it will have to come back and be added to the agenda for reconsideration.

Maybe it just depends on whether the Commissioners like a topic whether it has to be on the agenda to be voted on.