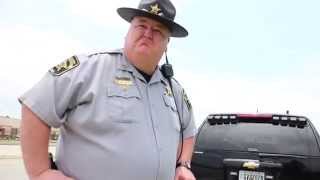 Lowndes County, an oasis of constitutional rights. Yes, really. Here’s video evidence. This kind of good news could do more to attract businesses here than many things the local powers that be are doing.

Carlos Miller wrote for Photography is Not a Crime 25 June 2014, Georgia Deputy Surprises us all by Respecting Constitution,

It started off with a federal protective service officer pulling up to Jeff Gray in a patrol car for taking pictures from a public sidewalk outside the Moody Air Force Base in Georgia Monday.

Gray told the officer that he was photographing the railroad. But the cop had his doubts and accused him of photographing the entrance to the base — as if it would make any difference within the scopes of the law — and decided to call the local sheriff for backup.

When Gray tried to walk away, the cop informed he was being detained.

When Gray asked for his name and badge number, the cop informed Gray he was free to leave.

But naturally, it couldn’t end there.

Within minutes, a Lowndes County sheriff’s SUV pulled up and out stepped a burly deputy.

Staff Sgt. Guthrie extended his hand, introducing himself by name, asking for his side of the story.

Gray explained he was only taking pictures of airplanes, adding “they don’t like it very much.”

And then the sergeant took us all by surprise:

“They need to go back and read the Constitution,” I believe,” the sergeant responded.

“I’m not angry at you, I’m not upset at you, and you’re not doing anything illegal as far as I’m concerned,” he said

“They get a little excited, but as I said, you’re in a public access area.”

I have also had an experience with a Lowndes County deputy informing other authorities who should have already known that videoing is not a crime. That other deputy explained the Georgia Open Meetings Act when somebody called him to try to get him to stop me videoing an open meeting. 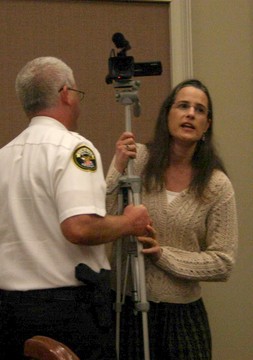 Visual, sound, and visual and sound recording during open meetings shall be permitted.

Maybe the Lowndes County Sheriff’s office is familiar with the two U.S. Circuit Court of Appeals rulings, which the Supreme Court has declined to review, saying that citizens can record police and all other elected and appointed officials on the job:

Gathering information about government officials in a form that can readily be disseminated to others serves a cardinal First Amendment interest in protecting and promoting ‘the free discussion of governmental affairs.’

So, like PINAC says, Sheriff Chris Prine’s department seems to be practicing what it preaches on its website, including:

“Our fundamental duties are to serve humanity; to safeguard the lives and properties of our citizens; to protect the innocent against deception, the weak against oppression or intimidation and the peaceful against violence; and to respect the constitutional right of all persons to liberty, equality, and justice. To attain this, the Lowndes County Sheriff’s Office enforces the law in a fair and impartial manner, recognizing both the statutory and judicial limits of our authority and the constitutional rights of all persons.”

And PINAC’s video of SSGT Guthrie has been noticed, everywhere from normally alarmist Alex Jones’ InfoWars.com to Hyannis News way up on Cape Cod, Massachusetts to Before It’s News, which has a picture of SSGT Guthrie with his hand ready to shake yours, and an invitation:

Please watch video below, and share it with everyone you know.